Monument to the Partisan

The monument is dedicated to the partisans of the Krasnik region from 1940 to 1944. It was founded by the society and symbolizes the memory of the sacrifice.

Stanislaw Surdacki Square in Krasnik, at the intersection of Gabriela Narutowicza, Andrzej Struga and Mostowa Streets, near the Cursed Soldiers Circle.

On the pedestal on the front panel: 'Heroic partisans of the Krasnik land 1940-1944'

On the side walls of the plinth as an element of relief fragments of the People's Guard March:

'We from the burnt villages/ we from the starving cities/ For hunger for blood/ for years of tears/ the time for revenge has come/ So put your weapon/ and into the heart of your enemy aim/ the sound of steps/ steps of millions/ sounds guerrilla singing'.

The guerrilla figure, cast in bronze, 3.3 metres high, shows a walking guerrilla with a belt of cartridges and a 'pepesha' gun, a statue set on a 4.7 metre high plinth, to which 2 boards were attached. On the front and back wall of the plinth there are inscriptions. On the side walls bas-reliefs depicting scenes 'from guerrilla life', among others leaving the village, mother saying goodbye to her son, preparations for derailing a German military train.

The chiseled monument of Professor Franciszek Strynkiewicz from the Academy of Fine Arts in Warsaw, Monument, erected on an urn with the ground from the battlefield of Porytowy Wzgórze (14 June 1944).  The bas-reliefs decorating the pedestal were made by the wife of the author of the monument - Barbara Strynkiewicz. The monument was unveiled on 22 July 1967. The unveiling of the monument was attended by the chairman of the Presidium of the Provincial National Council Paweł Dąbek and the Deputy Minister of National Defence General Grzegorz Korczyński.

The partisan standing on the plinth was considered to be the most characteristic object in Krasnik. For years postcards from the city were issued mainly with his image. In 2018, according to the Institute of National Remembrance (IPN), the monument was considered 'incompatible with the Act prohibiting the propagation of communism or other totalitarian system' and the city was given a deadline of 6 July 2018 for its removal. The city approached the Museum in Kozłówka with a proposal to move the monument, which however refused to take it over. In 2018 the Association Fair Kraśnik started collecting signatures under the petition demanding that the monument be preserved on site. Within a week, 1500 people signed the petition, including Andrzej Maj, the starost of Kraśnik, and the Association of Veterans and Former Political Prisoners of the Republic of Poland also defended the Guerrilla Monument. Eventually, the Lublin Voivode declared that he would not demand the dismantling of the monument, while the plaques hanging on the monument and the inscriptions on the pedestal would be corrected to clearly indicate the participation of various formations in the guerrilla war in the southern Lublin region.

For many residents it is a significant and important symbol of the city and its history. Its image has been on postcards, stamps and guides for many years.  Although it has lost its original meaning of the most important monument in the city, for some residents it is still an important element of local identity. Quite a big involvement of the inhabitants in the defence of the monument in 2018, de facto, determined that the monument should remain. 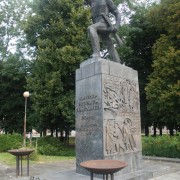 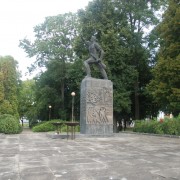