Monument to the Home Army (Jaslo)

The monument commemorates the soldiers of the Rzeszów Home Army who, in the night of August 5-6, 1943, in action under the code name 'Pension', released 180 prisoners from a German prison.

The monument is located near the city park on Staszica Street in Jaslo, next to the court building.

'God Honour Homeland / in tribute to the Home Army Soldiers'

'Here stood the building of the district court and the prison, built in 1889 and demolished with the whole town by the Nazis in 1944. Soldiers of Home Army Lieutenant Zenon Sobota "Korczak", Lieutenant Zbigniew Cerkowniak "Boruta", Platoon Platoon Platoon Colonel Stanislaw Kostka "Dabrowa", Platoon Colonel Jozef Okwiak "Trójka", Scout Stanislaw Magura "Paw" at night on August 5, 1943 took over the prison and released 66 political prisoners. In tribute to the Heroes of 1989 citizens of Jasło'.

'This is where the erection act of 6 urns with earth from the places of fighting and execution was placed'.

The sandstone monument has the shape of an arch, which symbolizes the prison gate. In the light of the gate there is a prison grating, the upper part of which is broken out by a crowned eagle made of bronze. In the lower part of the grating there is the Fighting Poland Sign. On the right side of the monument there is a plaque from 1989.

During World War II, Jasło was under German occupation. On the night of August 5-6, 1943, the local branch of the Home Army (the armed forces of the Polish Underground State) carried out the action of releasing 66 political prisoners and 120 others from Jasło prison. The so-called " Pension" action is considered to be one of the most daring and best performed actions of the Home Army in the whole country. As a consequence, there was a change in the position of the head of the Gestapo and the German head of the prison in Jaslo. The court building from 1889, where the prison was located, was, like 97% of the city, destroyed in 1944 by the Germans withdrawing before the Red Army. In 1989, the action of liberating the prisoners was commemorated by a plaque (now built into the monument). On December 9, 2001, on the 6th anniversary of the deposit of the ashes of Lieutenant Colonel Józef Modrzejewski a.k.a. "Lis", the commander of the ZWZ - AK District, who died in the USA, at the Old Cemetery in Jasło, a monument dedicated to the "Pension" action was unveiled in the area of the former prison gate. The monument, erected on the initiative of the Jaslo society, was designed by the architect Andrzej Gawlewicz, the eagle was made by the sculptor Bogdan Samborski, and the grating was made by the blacksmith Maciej Dubiel. The monument features an erection act and urns with earth from the battlefields of soldiers from the ZWZ - AK Jaslo District and execution sites, including a cemetery in the Zarzycki forest, as well as a book dedicated to the action "Order to Conquer Prison", co-authored by the only surviving and living in Krakow Colonel Stanislaw Dabrowa - Kostka, during the action a corporal cadet called "Dabrowa". Among people participating in the unveiling and consecration of the monument there were: families of the action participants, including the daughter of the commander.

Since its unveiling, the monument has become a venue for patriotic anniversary celebrations and Home Army celebrations with the participation of the city authorities, veterans and residents.

The monument still plays an important role as a venue for local patriotic celebrations. Since 2013, on the anniversaries of the "Pension" action, the Colonel Stanislaw Dabrowa-Kostka Jasielski Freedom March in honor of the heroes and victims of this action starts from the monument. The organizers of the march are: The City of Jaslo, the Association of Jaslo and Jaslo Region Enthusiasts and the Scouting Association in Jaslo. The march takes place under the patronage of the Mayor of Jasło. The participants of the march, including among others scouts, follow the escape route of prisoners released by the Home Army, from Jasło in the direction of Żółków. 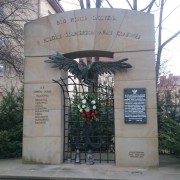