Monument to the Fallen for the Freedom of the Homeland

The monument was originally dedicated to the soldiers from Słupca who died during the First World War and the Polish-Bolshevik War, and later also: fallen during the Wielkopolska Uprising, World War II, victims of German extermination camps, the Katyn Massacre and the Sybiraks, soldiers of the Polish post-war independence and anti-communist underground, political prisoners in the years 1945-1956, anti-communist activists 1949-1950, Jews - citizens of Słupca, murdered by the Germans during the occupation.

The monument stands on the city square in Słupca. The square is surrounded by historic tenement houses from the turn of the 19th and 20th century.

The inscription on the stairs of the pedestal: '...The rights of Polish independence / all my strength, blood and life I will dedicate / from the Rota Oath of the Polish Military Organisation / to the Compatriots - the inhabitants of Słupca and the Commune of Słupca 11.11.2009'.

Inscription on the third board: 'Victims of German extermination camps / Katyn crime / Katorżnica Siberia 1939-1956 / murdered by the occupants: [56 names] and about 1500 Jews - Citizens of Słupca'

The inscription on the fourth board: 'Fighters for Free Poland 1944-1956 /Conspiratorial Polish Army / Jaworzniacy, Polish Freedom Party / against enslavement: [35 names]'.

The obelisk is placed on a wide pedestal and decorated with an emblem, and on top of it with five bronze balls. On each side of the pedestal - 4 steps leading to the obelisk. On each corner of the pedestal there is a black stone table.

The First World War opened up a chance for Poland to regain its independence, and the Polish military formations formed at that time laid the foundations for the creation of a Polish army, which was then victorious in the Polish-Bolshevik war (1919-1921). The monument was created on the initiative of the Mayor of Słupca, thanks to the generosity of the inhabitants. In the competition for the project, organized under the patronage of J. Piłsudski, the student Cezary Góralski won. The monument was unveiled on 3 May 1926 in the presence of a large number of residents.

The monument was a symbol of the dedication of the inhabitants of the Slupsk region to the cause of independence. It became an important point of the city. It welcomed important guests, the inhabitants gathered during national and local ceremonies and teachers told their students about history. In 1939 the Germans entered Słupca. In 1940, the occupiers demolished the monument. A flower-bed and a lawn were arranged in its place. After World War II, in 1946, in the same place, the so-called 'monument of gratitude' was erected, dedicated to the soldiers of the Red Army who died during the fights for Słupca, and at its feet - the graves of the dead. In 1990 a committee to rebuild the monument was established. In 1997. 13 soldiers were exhumed and moved to the war cemetery in Koło. On November 11th of the same year the pre-war monument was unveiled and consecrated, rebuilt with the efforts of the inhabitants. In 2009, on the pedestal there were 4 commemorative plaques with the names of people associated with the land of Slupsk who died and died in the years of World War I and II and were fighting against communist enslavement.  The list of names was established by the Honorary Committee of the Founders of Memorial Boards. In 2004, the monument was renovated.

The monument is a symbol of the contribution of the city's residents to Poland's independence. It is also an expression of the memory of both the heroes of successive fights and the victims of German and communist totalitarianism. The monument plays an important role as a place for patriotic celebrations organized in the city. They are attended by the city authorities, delegations of social organizations, scouts, school children and even preschool children. 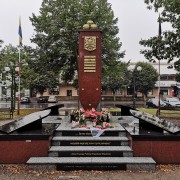