Mausoleum of the Battle of Ostroleka

The monument was built to commemorate the hundredth anniversary of the Battle of Ostroleka in 1831, the second largest battle of the November Uprising, in which the main forces of the Polish army clashed with the Russian army.

The monument stands in a square surrounded by a moat, inside a 19th century Tsarist fort, in the place where the most bloody battles took place during the November Uprising, now at the confluence of important arteries, 850 m from the Old Town, on the right bank of the Narew River.

Inscription over the entrances to the mausoleum: 'To the heroes who died on 26 May 1831'. The inscription on the information board (located at the beginning of an alley leading to the mausoleum): 'Monument to the Mausoleum of the Fallen at the Battle of Ostroleka on 26 May 1831 / Built on the 100th anniversary of the battle according to the design of Boris V. Zinserling and Romuald Zerich / Maintenance of the building carried out on the 180th anniversary of the battle financed by the European Regional Development Fund and by the Mazovian Voivodeship government'.

The mausoleum represents the constructivism form. It has been incorporated into an assumption of a historical military function. Its main element is a monumental chapel, which is a cubic white architectural concrete block visible from afar. Representative stairs lead to the main entrance. On both sides of the entrance there are sculptures - a knight in armour and a soldier. On the moat side, supported by massive columns, the entrance to the ground floor. Above the main and rear entrance - a large cross. In the upper room there is a chapel with raw concrete walls and a simple sarcophagus with ashes of fallen insurgents decorated with a simplified image of an eagle in the crown, set on the axis of the entrance. In the lower floor, the original sepulchral crypt, there is an exposition and educational space. The interior was illuminated with daylight through a skylight in the ceiling, on the crown of the building a viewing terrace.

In 1795. Poland was erased from the maps and its territory was divided between three partitioners (Russia, Austria, Prussia). In November 1830, the Poles began an uprising against the Russian Empire (the so-called November Uprising), which finally collapsed in 1831. The battle fought at Ostroleka was one of the most important and bloody battles of the Polish-Russian war of 1831. In 1847, to commemorate their victory, the Russians erected a monument on the site of the battlefield, referring to the Orthodox church architecture. To commemorate the upcoming 30th anniversary of the battle, the people of Ostroleka erected a wooden cross in the vicinity of the monument, under which a patriotic demonstration of several thousand people took place. The participants were subjected to repressions by the Russian authorities, but the crosses were not removed even during the construction of the earth fort there at the end of the 19th century. During the First World War, after the occupation of the city, the Germans dismantled and took away the Russian monument. In the spring of 1917 the population built a small brick chapel. After regaining independence in the interwar period, school children came to it together with their tutors. The memory of the battle came to life at the end of the 1930s, when Ostrołęka joined the national campaign to celebrate the 100th anniversary of the outbreak of the November Uprising, and the local Committee for the Celebration of the 100th anniversary of the Battle of Ostrołęka decided to commemorate those who died in 1831 by building a memorial-mausoleum. On the 99th anniversary of the battle, a foundation stone and an erection tin were laid, which had the form of an artillery shell and contained relevant documents and lumps from the graves of the generals who had merited the battle. The ceremony was attended by representatives of local authorities, clergy, the army, schools and the town's inhabitants. The funds were to come from the collection of voluntary donations. Construction began immediately after the competition for the design of the monument, whose winners were Romuald Zerich and Boris Zinserling. For the hundredth anniversary of the battle, only the foundations of the mausoleum were made and iron beams of the supporting structure were placed. On the eve of the solemn anniversary celebrations on 26 May 1931, the ashes of the insurgents were transferred from the parish church to the newly built crypt. The remains found during the earthworks in the city could have belonged to both Polish and Russian soldiers. The main ceremonies were held with the participation of local authorities and representatives of the Hungarian embassy, the army, scouts and a crowd of 10,000 people. Further construction, due to difficult terrain and modest funds, progressed slowly. Until the outbreak of World War II only a crypt and a reinforced concrete block were built.

During World War II, the building suffered from artillery shelling, and the stairs were dismantled on the order of the Germans by prisoners from the Łazek labor camp. After 1945, the communist authorities decided to leave the object unattended.  It was only after the 1956 thaw that the authorities made only minor repairs. On the 130th anniversary of the battle, official anniversary ceremonies were held at the monument for the first time after the war, and a committee for the reconstruction of the monument was formed. However, the reconstruction did not take place, but an amphitheatre was built in front of the mausoleum, with a stage and screen used until 1979 as a summer cinema and a place for festivities. On the 150th anniversary of the battle, a discussion on the concept of completing the construction began. Eventually, the city authorities decided to build the monument until 1990 according to the original design and purpose. Another construction committee was established. During the ceremonial celebrations, a 15-metre high wooden cross (in 1996 turned into a metal one) and an 8-tonne stone with an inscription signed by NSZZ Solidarność and NSZZZ of Individual Farmers was placed as "a votive offering and compensation for the years of profanation and devastation of the site of national remembrance". The reconstruction plans were ruined by declaration of the martial law (13 December 1981). Since 1989, the area of the fort at the foot of the mausoleum became a place of annual celebrations, but subsequent attempts at reconstruction on the 160th anniversary of the battle were unsuccessful. It was only in 2009, when the Kurpiowska Culture Museum in Ostroleka took over the guardianship of the monument, that the funds for its reconstruction were obtained. However, the condition of the building was so bad at that time that it needed to be dismantled and rebuilt again. The mausoleum and its interior was reconstructed by a team of architects according to the original pre-war design, with contemporary elements allowed in the new implementation. A competition for a new design of sculptures flanking the entrance was held, which was won by Beata and Maciej Aleksandrowicz. The reconstruction of the monument and the fort was finally completed in 2012. On the 181st anniversary of the battle of 26 May 2012, under the patronage of the President of the Republic of Poland, the official opening ceremony was held and the mausoleum was opened to the public. As part of the revitalization, the green areas around the fort and the moat were also cleaned up, and the earth elements of the fortification were reconstructed.

Nowadays, the mausoleum has regained its function of a memorial and resting place for the soldiers of the November Uprising. According to the original design, the central part of the mausoleum has a space with a sarcophagus with the remains of fallen soldiers. On the occasion of the 183rd anniversary of the battle in the presence of the Ostrołęka authorities, the remains of a soldier from the 4th Linear Infantry Regiment of the Kingdom of Poland were ceremonially laid to rest next to the soldiers buried there before World War II. The monument is also a tourist attraction. On the lowest floor there is a museum space with a multimedia exhibition on the Battle of Ostroleka, the history of the tsarist fortifications and the circumstances of the monument itself, as well as a collection - an army of miniature soldiers, consisting of over 1200 hand-painted lead soldiers. The roof of the building was also made available to tourists. From the terrace, you can see the fort, the battlefield and the city panorama. On the grounds of the fort there is an open-air museum of the artillery of the Kingdom of Poland, with replicas of cannons and rifles according to the 1805 design, including a copy of a prototype mortar launcher, designed by General Józef Bem. Anniversary celebrations with the participation of local authorities and masses for the intention of the fallen heroes are organized at the monument. The Ostrołęka site is an important place for building local identity. It is the only mausoleum in Poland to be integrated into the landscape of the battlefield. 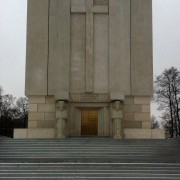