Monument to the Polish Armed Forces in the West

The monument commemorates the soldiers of the Polish Armed Forces in the West, a formation of the Polish Army formed in 1939 outside Poland on the basis of agreements concluded with France and Great Britain, fighting alongside the Allies in World War II and dissolved in 1947.

The monument is located on a pedestrian crossing between M. Skłodowska-Curie and Akademicka streets, among residential buildings.

Inscription on the sculpture (shield bottom): /Polish Armed Forces to the West / (and the names of those military formations)

The sculpture made of copper sheet represents the Polish military eagle, with its wings raised, turned to the right, holding the Amazon Shield in its claws. In the corners of the shield there are bas-reliefed portraits of Polish generals: on the left - Władysław Anders, on the right - Władysław Sikorski, in the lower part - an inscription. The sculpture was placed on an elongated pedestal made of granite cubes, in the form of a profiled arch consisting of five steps, with concave side walls. In the middle step of the pedestal, on the left side, an iron candle was laid in. There are ten inscription boards on the pedestal. In the upper left corner of each of them there is a bas-relief badge of the described military formation.

The Polish Armed Forces in the West were regular army formations being a part of the Armed Forces of the Republic of Poland, organized in exile during World War II at the side of Western allies: France and Great Britain. They consisted of land forces, Polish Air Force and Polish Navy. In the propaganda of the People's Republic of Poland, the role of the PSZ in the West was diminished and misrepresented, and the Commander-in-Chief, General Władysław Anders, was attacked. The monument commemorating the armed activity of the PSZ in the West was created in Białystok on the initiative of veteran Eugeniusz Kalinowski and prelate Colonel Czesław Kulikowski (1907-1996) - a prisoner of the Soviet camp in Kozielsk, then chaplain of General Anders' army. Efforts to build it began in 1986, but the ceremonial unveiling took place after the fall of communism, in 1991 on the national holiday of May 3. The monument was designed and executed by Jerzy Grygorczuk, a sculptor from Bialystok. The building was funded by contributions from over 400 people, including comrades-in-arms, Bialystok society, members of the Congress of Poles in Sweden and entrepreneurs. The bas-reliefs of the generals' portraits were funded by Marek Trokenheim, Białystok's secretary of the aforementioned Congress.

The monument plays a role as a venue for local patriotic ceremonies organised on the occasion of successive anniversaries of the Battle of Monte Cassino (fought by the Allied forces, including the 2nd Polish Corps under the command of General Władysław Anders, against the Germans in 1944). The ceremony is attended by representatives of the army, uniformed services, veterans, clergy, authorities and youth. 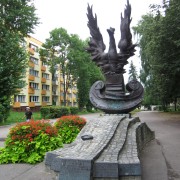