The monument is dedicated to the victims of the Katyn crime - a communist crime, committed by the decision of the highest authorities of the USSR by murdering about 22 thousand Polish citizens (including about 10 thousand army and police officers).

The monument stands in the open urban space, at Łąkowa Street, next to the Sanctuary of Our Lady of Victory.

The inscription on the monument: 'Katyn 1940. Murdered from Kozelsk, Ostashkov, Starobelsk and other camps'.

Inscriptions on plaques: 'Katyn - Kozielsk / Kharkiv - Starobielsk / Miednoje - Ostashkov / Unknown places Western Ukraine and Western Belarus' [and about 400 names of the victims of the Katyn crime]

The monument has the form of a quadrilateral pole with the Polish emblem and an inscription on it. It is made of granite. The whole composition is complemented by stone blocks standing on both sides of the monument, on which epitaphs are placed. On the pedestal of the monument there is a gas flame.

In the spring of 1940, on the territory of the Soviet Ukrainian and Belorussian republics, the NKVD killed with a shot in the back of the heads of Polish citizens - prisoners of war from Katyn, Kharkiv and Kalinin (Tver) and prisoners (military and civilians). During the period of the Polish People's Republic, the Katyn crime was denied by the authorities (the perpetration was attributed to the Germans). A monument in Łódź was erected after the fall of communism from social contributions, next to the temple erected as a votive offering for the victory over the Bolsheviks in 1920. It was designed by the sculptor Włodzimierz Ciesielski from the Academy of Fine Arts in Łódź. The design and construction works were performed by members of the "Katyn Family" Association in Łódź - descendants of the victims. On August 15, 1990, the foundation act was laid, and on September 16, 1990, the monument was unveiled with the participation of the families of the murdered, in the setting of the military ceremony. The monument was consecrated by the Bishop of Łódź, Władysław Ziółek, accompanied by clergy of Catholic, Evangelical, Orthodox and Mosaic denominations.  In the pedestal of the monument there are urns with soil from the death pits of Katyn, Kharkiv and Miednoje. The monument in Łódź was the first Katyn monument in Poland to be erected in an open urban space.

The monument plays an important role as a venue for local religious and patriotic ceremonies organized in the city on the occasion of the Day of Remembrance of the Victims of the Katyn Massacre, the Polish Army Day and the anniversary of the Soviet aggression against Poland. They are attended by representatives of local authorities, the Polish Army, State Police, services, scouts, schoolchildren and residents of Łódź. 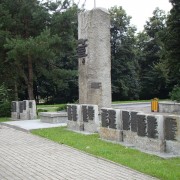