The monument is dedicated to Frederic Chopin (1810-1849), one of the most outstanding composers of the Romantic era and the most important Polish composers, an exceptional pianist of Polish and French origin.

The monument stands in the western part of the Royal Łazienki Park, a palace and garden complex from the 18th century, near the Belvedere Palace and Ujazdowskie Avenue.

The inscription on the pedestal: "The statue of Fryderyk Chopin destroyed and seized by the Germans on 31 May 1940 will rebuild the Nation. 17-X-1946'.

"The flame will bite through the painted history".
The sword's treasures are being wiped out by thieves,
- The song will go all the way!... / "Adam Mickiewicz (Konrad Wallenrod)

The Art Nouveau monument, 640 cm high, depicts the composer sitting under a stylized weeping willow, leaning against the wind. Listened to the noise of the trees, Chopin, in inspiration, raises his right hand over the keyboard of the invisible piano. The monument is made of bronze and stands on a red sandstone pedestal. Part of the monument is a pond made of the same material. The monument is integrated into a garden with amphitheatre-planted trees to resemble a concert hall.

The idea of commemorating the composer was put forward by the Warsaw Music Society in 1876. At that time, Poland was partitioned, and the Russian authorities did not agree to implement the patriotic initiative. In 1901 Tsar Nicholas II, through the intercession of the singer Adelaide Bolska, gave his consent. The winner of the 1908 design competition for the monument was Wacław Szymanowski. The procedure of approving the design by the authorities was prolonged and it was subject to further corrections. Work on the construction was interrupted by the First World War. It was undertaken after the restoration of independence with the support of the authorities. The pedestal and swimming pool were designed by Oskar Sosnowski. On November 14, 1926, with the participation of the Polish authorities, diplomatic corps and crowds of Varsovians, the unveiling took place. The ceremonies lasted 3 days. They were accompanied by concerts with the participation of the best musicians of the time. They were recorded by European media.

During World War II, under the German occupation, the performance of Chopin's music was banned (when the thesis about the composer's German origin began to be propagated, the occupation authorities revoked the ban), and the monument was on the list of objects of Polish culture to be destroyed. In 1940 the monument was one of the first in Warsaw to be blown up and cut into pieces by torches. 16 tons of scrap metal was used for military production. The Germans also tried to destroy all copies of the monument stored in Polish museums. After World War II, on the anniversary of Chopin's death in 1946, an inscription announcing the reconstruction of the monument appeared on an empty pedestal in the Łazienki Park. However, efforts to reconstruct the monument came up against great difficulties. Eventually, after an extensive search, it was possible to find a copy of the monument while the author's house was being demolished. On its basis, a faithful replica of the monument was created. In the mid-1950s, the authorities of the People's Republic of Poland agreed to rebuild it. On 11 May 1958, the reconstruction of the monument in its former place was unveiled in the presence of the communist authorities and crowds of Warsaw inhabitants.

At the turn of the 20th and 21st century and in 2012 the monument and its surroundings were revitalised. Since 1959, every Sunday from May to September, concerts of Chopin's works have been held at the monument, organised by the Fryderyk Chopin Society and the Stołeczna Estrada, performed by world-famous pianists on a piano set at the foot of the monument, on a specially designed platform. The concerts gather crowds of people of all ages and serve to popularize high culture. The Chopin monument is considered a masterpiece. It is one of the most recognizable Polish sculptures and a symbol of Warsaw. Its smaller copy is located in the Japanese city of Hamamatsu. 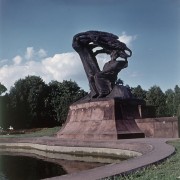