Monument to the Battle of Iganie

The monument commemorates the victorious Battle of Iganie, fought during the November Uprising on 10 April 1831 by Polish troops with Russian army.

The monument is located on the right side of the road leading from Warsaw to Siedlce, among the greenery.

The inscription on the pedestal:

"thanks to the generosity of society by the Siedlce on the hundredth anniversary of the centuries-old battle erected".

The monument has the shape of a prism 8 m high of red sandstone topped with a ball on which an eagle with wings spread to fly is placed. On the front of the monument there is a Virtuti Militari Cross.

In 1795. Poland was erased from the maps and its territory was divided between three partitioners (Russia, Austria, Prussia). In November 1830. The Poles began an uprising against the Russian Empire (the so-called November Uprising), which finally collapsed in 1831. After Poland regained its independence, it was decided to commemorate the victory at the Iganie. In 1922 the Monument Building Committee was established. The place where the battle took place was the site of the birch cross and the erection act. The funds were collected among the inhabitants of Siedlce County. The competition for the project, announced in 1928, was won by architecture student Jan Mucharski. The author of the sculpture was sculptor Wiktoria Jacynina. The monument was cast in bronze donated by the Ministry of Military Affairs. On 13 September 1931 the monument was ceremonially unveiled in the presence of about 15 thousand people.

During World War II, the Ignanie were under German occupation. The Germans dismantled the eagle that decorated the pedestal. The monument returned to its original shape as part of the celebrations of the 400th anniversary of the town of Siedlce and 130th anniversary of the Battle of Iganie on 9-11 June 1961. In 2017 the municipality of Siedlce carried out revitalization of the monument and its surroundings, financed by the Minister of Culture and National Heritage as part of the program: "Supporting the care of memorial sites and permanent commemoration in the country". Its aim was, as it was assumed, to give it a representative character and create a convenient space for organizing patriotic meetings, thus increasing knowledge about Polish history and strengthening civic awareness and patriotic attitudes in 2018, the 100th Anniversary of Poland regaining independence.

The monument plays an important role as a venue for local patriotic celebrations held on 10 April on the anniversary of the Battle of Iganie. They are attended by representatives of local authorities, clergy, delegations of the army, social organizations, a descendant of General Ignacy Prądzyński (who commanded the Polish forces during the battle), residents and school children of Siedlce County, who are preparing a commemorative artistic program. The monument is cared for by students of the General Ignacy Prądzyński Primary School in the Educational Complex in Nowe Iganie. The ceremonies at the monument organized in April on the anniversaries of the battle and the laying of flowers and candles at the monument are also a point in the program of bicycle and pedestrian rallies organized by the Polish Tourist and Countryside Association in Siedlce since the early 1980s. They are accompanied by historical knowledge competitions. Since 2012, every year in September, i.e. on the anniversaries of the unveiling of the monument, bicycle rallies organized by the Nasze Iganie Societies have been taking place from here. They serve not only to commemorate the battle, but also to learn about the history of the heroes and the surrounding sites of the fight for independence. In 2018, a record number of about 90 participants of different ages took part in it. The monument is included in the list of monuments. 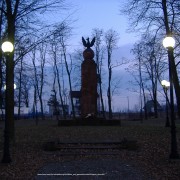 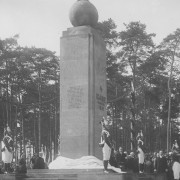