The monument is dedicated to Stanislaw Moniuszko (1819-1872), one of the most eminent composers of Polish Romanticism, called the "father of Polish national opera", referring in his music to Polish, Lithuanian and Belarusian folklore.

The monument stands in the square near St. Catherine's Church in the Old Town of Vilnius.

A small bust of the composer is placed on a black marble plinth. The pedestal is decorated with a lyre.

Moniuszko came from the Minsk region (now Belarus). He created music to strengthen the hearts of Poles enslaved by the partitioners. He was associated with Vilnius between 1836 and 1858, working as an organist, music teacher and a conductor at the Vilnius Theatre. Here he composed many of his works. The monument to commemorate the 50th anniversary of the composer's death was initiated by the Vilnius authorities and the painter Ferdinand Ruszczyc. The monument was unveiled on September 19, 1922 in the presence of Vilnius crowds. The author was probably the artist-sculptor Bolesław Bałzukiewicz (although Bolesław Syrewicz is also mentioned). The bust was placed on the pedestal of the Puszkin monument, which had previously stood in another part of the city. The poet's bust was dismantled in 1915 and transported to Russia by Russian troops retreating before the German army. The monument was built with contributions from the residents of Vilnius and, as too little impressive, was to be temporary. It was the first monument of its kind in the city after more than 100 years of captivity and the composer's monument in the Second Polish Republic.

After the incorporation of Vilnius into the USSR after World War II the traces of Polishness of the city were destroyed. The monument was devastated several times. In the 1970s the bust was removed and destroyed. In 1989 the monument was renovated, but the square where it stood remained neglected. It became the object of hooligan acts. The damaged elements (the composer's bust and the stolen lyre from the pedestal) have been reconstructed, but the head is not original. With time, the surroundings were cleaned up.

2019 was the 200th anniversary of Moniuszko's birthday. During the anniversary celebrations, under the patronage of UNESCO, it was emphasised that the composer unites three nations: Polish, Lithuanian and Belarusian. The attention was also drawn to the importance of the composer's person for Vilnius' cultural heritage. To mark the anniversary, the composer's monument was solemnly included in the interactive project "Talking Monuments". Interested passers-by can get to know important historical and fictional figures via mobile phones. The sounded monument, with the voice of Lithuanian conductor Donatas Katkus, "tells" about his life and work in Vilnius. On the initiative of the Polish Embassy and the Polish Institute in Vilnius, this story can also be heard in Polish. Tourists can also choose the English version. As part of the celebrations at the monument, the Vilnius authorities and the Polish Institute organized "birthday happenings", which were supposed to introduce young people in Lithuania to the figure and work of a composer they do not know very well. 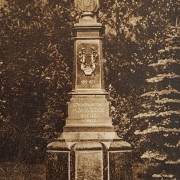 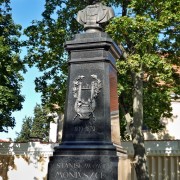