The monument commemorates the Polish politician and publicist Roman Dmowski (1864-1939), founder and leader of National Democracy. 1917-1919 he headed the National Committee of Poland, which was regarded by the Entente states as a substitute for the Polish government in exile. Poland's delegate to the Paris Conference in 1919 and signatory of the Versailles Peace Treaty, in 1923 Minister of Foreign Affairs

Square at the junction of Szucha Avenue and Ujazdowskie Avenue in Warsaw, not far from the square at the crossroads, near the Ministry of Foreign Affairs building.

The bronze figure, cast in bronze, is about 5 metres high, placed on a small pedestal, depicts Roman Dmowski holding the act of the Treaty of Versailles in his left hand and a hat in his right.

The construction of the monument was initiated by: Maciej Giertych, Bogusław Kowalski and Jędrzej Dmowski, In 2004, the Warsaw Council decided to allocate funds for the construction of the monument. The cost of its erection was 535 thousand PLN. It was unveiled on 10 November 2006 in the presence of about 200 people, among them politicians. The monument was consecrated by Rev. Henryk Jankowski. The authors of the sculpture are Dr Wojciech Mendzelewski, Maria Marek Prus and Piotr Prus. Marek Edelman, a participant of the Warsaw Ghetto Uprising, and Prof. Maria Janion, a literary historian, who accused him of chauvinism, racism and anti-Semitism, protested against the commemoration of Roman Dmowski.

Due to the controversies connected with Dmowski's historical evaluation, his figure from time to time becomes a target of vandalism attacks. Shortly after the unveiling on 11 November 2006 he was painted with pink paint. The plaque and inscription were painted, a swastika was drawn on the back of the monument with a spray, and anti-Semitic quotations from Dmowski's writings were reflected with stencils on the pavement slabs around the pedestal. There was also an attempt to set the monument on fire. 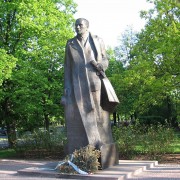