Monument to the Brotherhood in Arms

The monument commemorated the fights of Polish and Soviet soldiers and was a tribute to the approximately 600,000 Red Army soldiers who died on Polish soil during World War II.

The monument was located on Wileński Square in Praga-Północ district of Warsaw, near the intersection of Solidarności Avenue and Targowa Street.

On the pedestal, which was dismantled in 2011, there were single-sounding inscriptions in Polish (from the south) and Russian (from the north):

Glory to the heroes of the Soviet Army, Comrades-in-arms, who gave their lives for the freedom and independence of the Polish nation, this monument was erected by the inhabitants of Warsaw in 1945.

Until 1947, the first sentence of the inscription reads: Glory to the heroes of the Red Army who died in the struggle to liberate Poland.

The main sculptural group presents three Soviet soldiers in combat, facing westwards. The two of them were belaying a colleague between them, leaning in a deep assault to throw a grenade. In the lower part of the monument there is a sculpture of four soldiers, two Polish and two Soviet, with their heads leaning down, serving a symbolic, eternal guard. They are placed diagonally on four low corner pedestals. The way the sculptures were depicted made the monument jokingly called the "four sleeping" or "four sad" monument.

The height of the monument is about 10 m.

The first monument in post-war Warsaw, unveiled on 18 November 1945, was a sketch project by the Soviet sculptor Major A. Koralewo: Stanisław Sikora, Stefan Momot, Józef Trenarowski, Józef Gazy, Bohdan Lachert (execution), Jerzy Jarnuszkiewicz (sculpture enlargement). On the day of the unveiling of the monument, plaster casts of the sculptures were presented, painted with paint imitating bronze, in August 1947 they were replaced with bronze sculptures.

Compared to the work from 1945, the appearance of the sculptural group on the pedestal of the monument changed in 1947. A grenade in the hands of one of the three soldiers was replaced by a pepesha, and the outermost sculptures were replaced by places. The first sentence of the inscription was also corrected. The pedestal, originally made of red travertine, was covered with red sandstone.

1960-1961 the monument was renovated and rebuilt. At that time the red cladding was replaced with new ones made of light sandstone and the sculptures were restored. At the same time the monument was raised by placing it on four terraced stairs.

In 1966, due to the reconstruction of the intersection of Targowa Street and then Karol Świerczewskiego Avenue (now Solidarności Avenue), the monument was moved 8 meters to the east.

On 26 May 2011, the Warsaw City Council passed a resolution to move the monument from its current location in the central part of Vilnius Square to the northern side of the square behind the exit of Saint Cyryl and Metode Street, in connection with the construction of Line II of the underground.

In November 2011, the monument was disassembled, the sculptures and the plinth's cladding were subjected to conservation.

On 26 February 2015, the Warsaw City Council repealed its 2011 resolution to return the monument to Vilnius Square and placed it in one of the city's warehouses.

In 2018 the monument was handed over to the Polish History Museum in Warsaw. The sculptures of the soldiers will be placed in the part of the exhibition dedicated to the People's Republic of Poland in the new museum building in the Citadel. 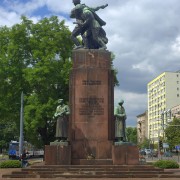 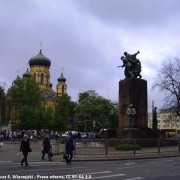