Monument to the Heroes of Bialystok Region

Originally, the monument was supposed to commemorate the citizens of Białystok who fought for Wizna, Nowogród, Białystok, Zambrów, and those killed on the fronts of World War II, murdered in concentration camps and the Białystok ghetto.

The monument is located in the Central Park, at the intersection of Konstanty Kalinowski, Józefa Mariański and Uniwersytecki Square, near the former seat of the Provincial Committee of the communist party (PZPR) (currently the University of Bialystok building).

In 1990 the inscription changed to: "Fallen and murdered for free Poland".

In 2009 a brass plaque with the inscription was added to the neighbouring stone: "Glory and honor to the Soldiers of the First and Second Polish Army, who fought and died for the freedom and independence of their homeland".

In 2011 the inscription was placed on the monument: "God, Honour, Homeland".

The Monument to the Heroes of Bialystok Region consists of 9 soaring 17-metre tall columns connected with each other by a symbolic copper crown of trees, forming a nest in which a full-plastic sculpture of an eagle with its wings spread out is placed. A copper motif is repeated on parts of the columns, 1/4 of their height. The monument is made of reinforced concrete, the sculptural elements (eagle and tree crown) - of copper, and the base - of granite slabs. In 2011, three columns of the monument were vertically inscribed with metal inscriptions: God, Honor, Homeland, and a crown was mounted on the head of the eagle. In XI 2018 a horizontal inscription was added: "Independence".

In 1972, the Provincial Civic Committee for the Protection of Monuments and Martyrdom in Białystok organized the first contest for the design of a monument to the Heroes of Białystok Region. However, the selected project by Stanisław Wakuliński did not receive the approval of the Minister of Culture and Art. The monument was finally unveiled on October 18, 1975. The author of the design of the monument is Jan Bohdan Chmielewski, and the design of the monument's surroundings was made by Mirosław Zbichorski. The unveiling ceremony was attended by the Honorary Company of the Polish Army, and among others, General Włodzimierz Sawczuk, Deputy Minister of National Defence, Mirosław Milewski, Deputy Minister of Internal Affairs and Władysław Juszkiewicz, First Secretary of the Polish communist party (PZPR) in Białystok.

On March 31, 1990, the monument was consecrated by Catholic and Orthodox clergy, in the presence of the numerous citizens of Bialystok. In 2010/2011 there was an initiative to place an inscription on the monument: God, Honour, Homeland and crowns on the head of the eagle. A Committee for the Discommunization of the Monument was established, headed by Tadeusz Waśniewski. This idea did not receive the approval of the author of the monument and the relevant offices, so on the initiative of the Club of Prisoners, Internationals, Repressions in Białystok and the Union of Political Prisoners of the Stalinist Period in Białystok on September 24, 2011, the inscriptions and the crown were illegally installed. These changes were accepted in October 2018 by the City Council and it was then decided to add the inscription "Independence" In 2019 a competition was to be announced to develop a concept for a project to change the monument's symbolism.

After 1989 the monument ceased to be the place where the most important patriotic celebrations in the city are held at the Józef Piłsudski monument. Due to its arbitrary "decommunization", the monument still attracts the attention of the residents and evokes discussion among them. It is present in most of the guides. 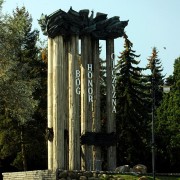