The monument is dedicated to General Tadeusz Kościuszko, Commander-in-Chief of the Kosciuszko Uprising of 1794, a participant in the War of Independence of the United States.

The monument stands at Freedom Square in Łódź, at the exit of Piotrkowska Street in the northern direction.

A four-meter bronze cast statue of Tadeusz Kościuszko, in a standing position, supported by a poplar symbolizing the "Tree of Justice", holds in his hand a document rolled up (probably the text of the Polaniecki University). Between his legs there is a knight's armour and a small cannon. The statue stands on a 13-metre high pedestal. In the pedestal there are four bronze cast reliefs depicting momentous scenes from Tadeusz Kosciuszko's life: an oath in the Krakow market square, Kosciuszko with Jerzy Washington, Kosciuszko standing with Bartosz Glowacki by the cannon and the signature of the Polaniecki University. The whole monument is 17 meters high.

The decision to erect a monument to T. Kościuszko in Łódź was made on October 15, 1917, during a solemn meeting of the City Council of Łódź, on the occasion of the centenary of his death. In the first 1926 the project of the sculptor Mieczysław Lubelski was selected. Casts of the Kościuszko statue and bas-reliefs of the plinth were made at the School of Crafts in Pabianice under the direction of Władysław Wagner, from material purchased for social contributions. The ceremonial unveiling took place on 14 December 1930 and was done by the Mayor of Łódź Bronisław Ziemięcki. The ceremony gathered about 30 thousand inhabitants of the city.

In November 1939, the German occupation authorities demolished the monument. After World War II, in 1946, a contest to rebuild the monument was announced. However, the project by Edward Nowicki, presenting the figure of Kościuszko on horseback, did not gain the approval of the then city authorities. In March 1956 the topic of monument reconstruction returned, the Committee for the Rebuilding of Tadeusz Kościuszko's Monument was established, and a collection of money and non-ferrous metals for this purpose was initiated. The action was conducted under the motto: "Rebuild the monument to Tadeusz Kościuszko in the form in which it was destroyed by a deadly enemy of the Polish nation! The pre-war creator of the monument, Mieczysław Lubelski, was invited to make a copy. Due to his old age, he was helped by sculptors from Łódź - Antoni Biłas (bas-reliefs) and Elwira and Jerzy Mazurczyk (the figure of the Chief). The unveiling ceremony of the monument took place on 21 July 1960.

The monument is one of the most characteristic symbols of Łódź, underneath which flowers are laid during official celebrations of national holidays. The object is also present in tourist guides to Łódź. 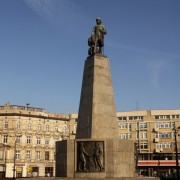