The monument is a tribute to the children and young people who were imprisoned and murdered in the "educational" camp, created in December 1942 by the Germans in the Lodz Ghetto, on Przemysłowa Street. Officially, there were children and young people who were considered juvenile offenders. In fact, small Poles were held there, whose parents were in Nazi prisons. Five thousand small prisoners went through the camp. At the turn of 1942 and 1943 typhus caused the death of 1/3 of the camp inhabitants.

The Monument to the Martyrdom of Children is located in the Szarych Szeregów Park, at the intersection of Bracka and Staszic Streets, and on the other side of Marysinska Street.

You've been deprived of your life, today we only give you memory.

The Monument shows an 8-metre high, broken heart, on one side there is an empty space in the shape of a child, on the other side of the heart there is a figure of a emaciated child standing with his back to the viewer. Next to it there is a plaque with an inscription, and a candle which has been lit (for financial reasons) for about 20 years only during the ceremony at the monument.

The monument was erected on the initiative of the students of the School and Education Centre for Deaf Children in Przemyśl, who wrote a letter to the war veterans assosiation (ZBoWiD) proposing to erect a monument to commemorate the martyrdom of children imprisoned during World War II in a nearby German "educational" camp for Polish children and youth, at Przemysłowa Street. The monument was solemnly unveiled on 9 May 1971, on the 26th anniversary of the victory over Nazism. The ceremony was attended by the ZHP (Polish Scouting and Association) flag from Łódź, the Deputy Prime Minister of the Polish People's Republic Wincenty Kraśko, the Łódź authorities and former prisoners of the camp. The monument was designed by Jadwiga Janus, and the architectural design by Ludwik Mackiewicz. The monument was placed in a specially built park in the place of an empty field, it was named "Radiates" (commemoration of the underground group of the People's Guard/Army), since 1991 it is the Szarych Szeregów Park.

Every year on June 1st, International Children's Day at the Monument to Child Martyrdom, children and youth (students, scouts) from the Lodz region pay tribute to the children victims of World War II. 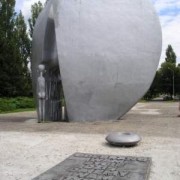 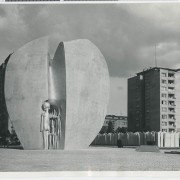