The monument is located in the Free Speech Square on Mysia Street in Warsaw, between Nowy Świat and Bracka Street and between the BGK building (from Mysia Street there is an entrance to the Ministry of Infrastructure and Development and PGE headquarters) and the southern frontage of Mysia Street. During the communist era (1946-1990) the headquarters of the Central Office of Press, Publications and Entertainment Control (censorship) was located on Mysia Street 5. Currently, the Liberty Corner service and office building.

A bilingual (Polish and English) description of the monument and its context, together with a bilingual quote from the Tacit, is placed on a vertical plate of transparent material: 'The exceptional happiness of these times is that you are allowed to think, and what you think is allowed to say'.

The monument shows a long (90 m) black censorship line physically crossing the square. Near the entrance to the former censorship building. The black stripe (made of black concrete on a steel construction) "peels" off the floor of the square, releases the word, reveals the erased content.  The height of the monument is 4.5 m. Next to it, a bilingual (Polish and English) description of the monument and its context, together with a bilingual quote from the Tracyta, is placed on a vertical plate made of transparent material.

The monument was created on the initiative of people involved in the underground publishing movement on 6 January 2010. The Speaker of the Sejm, Bronisław Komorowski, took the construction of the monument under his honorary patronage and then patronized it as President of the Republic of Poland. On 29 January 2010 the Committee for the Construction of the Free Speech Memorial was established, the competition for the design of the monument was won by Katarzyna Bronska, Mikołaj Iwańczuk and Michał Kempiński. During the announcement of the results of the competition, an auction of works of art, the sale of which helped to create the memorial, was held. The monument was unveiled on 5 June 2014. It was unveiled jointly by the publishing community, in the presence of, among others, the President of the Republic of Poland Bronisław Komorowski, his wife Anna Komorowska and the President of Warsaw Hanna Gronkiewicz-Waltz. The unveiling of the monument was part of the celebration of the 25th anniversary of the partially free elections in 1989.

A symbolic monument in the form of a monument, present in guides and often shown to tourists. The monument is not fenced, the black belt (part of the monument) is in fact part of the pedestrian walkway of the promenade, where passers-by walk, cyclists ride, etc. 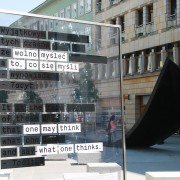