The monument is located on the edge of the Izabela and Jarogniew Drwęski Park, in Poznań, near the Poznań Główny railway station.

A 17-meter monument covered with grey granite. The obelisk is surrounded by a bronze sculptural element with bas-reliefs depicting: an eagle, the strike of the children of September, the Drzymała car, the figure of Marcin Kasprzak among the workers, the death of the first insurgent Franciszek Ratajczak. Next to the obelisk there is a sculpture depicting two insurgents - an officer with a sabre and a private rifleman with a gun.

The first ideas to commemorate the deeds of the Wielkopolska Insurgents appeared as early as 1921, but it was not until after World War II that they were implemented, thanks to the efforts of Jan Szydlak, the First Secretary of the Polish communist party (PZPR) in Poznań. In 1961 the Social Monument Construction Committee was established, headed by Franciszek Nowak, chairman of the party control committee of the PZPR Voivodeship Committee in Poznań. The monument, designed by Alfred Wiśniewski, was unveiled on 19th September 1965 by the then Polish Marshal, a member of the Political Bureau of the PZPR Central Committee Marian Spychalski (before the war he worked as an architect in the Poznań City Hall).

Originally intended by the creators of the monument, it was to be the venue for state ceremonies and important anniversaries. However, this role is played by A. Mickiewicz Square in Poznan, with the monuments of the bard and the Poznan Rising of June '56. At the monument of the Silesian Insurgents, the celebrations of the outbreak of the victorious uprising take place every year. 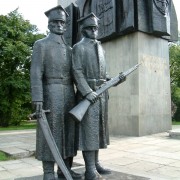 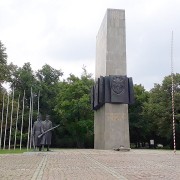