The monument commemorates the events of Black Thursday (June 28, 1956), when there was a demonstration of workers from Zakłady Cegielski in Poznań (then called Zakłady im. Józefa Stalina Poznań - ZISPO), who organized a strike in protest against the economic situation and social injustice. The strike turned into a street demonstration - the biggest workers' protest in the history of People's Poland. At the Adam Mickiewicz Square (at that time the Joseph Stalin Square) about 100 000 people gathered to fight for their rights and protest against the communist authorities.

The monument of Poznan June 1956, is located at Adam Mickiewicz Square in Poznan, in the vicinity of the Adam Mickiewicz Monument and the Castle. It stands in the place where the Monument of the Heart of Jesus - Monument of Gratitude for regaining independence, destroyed by the Germans during the World War II, and in the years 1903-1919 a monument to Otto von Bismarck was located.

On an obelisk with the head of an eagle: For freedom, right and bread. June 1956

The monument consists of two steel pylons 21.1 m high and 19.5 m high, shifted in relation to each other, which symbolize death and resurrection and are connected by a 10.4 m long transverse beam tied to them with a solid knot, which gives the effect of two walking crosses. The third element of the monument is the head of an eagle with a broken wing, incorporated into the "rising" third cross, whose column is about 7 m high.

The postulate to build a monument to the victims of June 1956 was put forward on 10 October 1980 during a general meeting of representatives of the Wielkopolska NSZZ Solidarność, on 21 October 1980 the Social Committee for the Construction of the June 1956 Monument under the leadership of Roman Brandstaetter was established, on 6 February 1981 Adam Graczyk's chosen project. Its preparation took place at an express pace, for 6 weeks from 5 May 1981 to 17 June 1981. From the beginning, it was assumed that it must be unveiled on the 25th anniversary of the June events.

The monument quickly became an expressive symbol of remembrance of the anti-communist opposition of society, reminiscent of the riots of 1956-1980. The declaration of martial law on 13 December 1981 highlighted its importance as a symbol of the struggle for freedom. Mickiewicz Square and the monument became the main place where the citizens of Poznań manifested their attachment to the fight for freedom and their rights. Under martial law, after the pacification of the "Wujek" coal mine, the date 1981 was painted on the cross, quickly painted white by the authorities. In 1991, after the collapse of communism, the monument was permanently added to the occasion of the renovation. During numerous demonstrations held in the 1980s at the monument in 1982, militia officers beat Wojciech Cieślewicz and Piotr Majchrzak to death. In the 1980s, the symbol of the Poznań Crosses became a sign commonly used by opposition circles, used on leaflets, posters, stamps, underground press, etc. On June 3, 1997, during his sixth pilgrimage to Poland, John Paul II met with young people in Mickiewicz Square and prayed at the Monument for the victims of Poznan's June. The celebration of the 50th Anniversary of June 1956 had a special setting. Presidents Lech Kaczynski (Poland), Horst Köhler (Germany), Václav Klaus (Czech Republic), Ivan Gašparovič (Slovakia) and László Sólyom (Hungary) met at the Crosses and gave speeches on the theme of Poznan June. In 2006, the inscription "For God" was added to the monument.

One of the most important monuments of Poznań, in front of which state and local ceremonies are organized, present in most of the city guides. A universally recognized symbol of the city, present in mass culture. 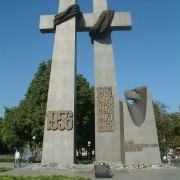 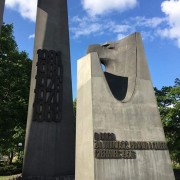 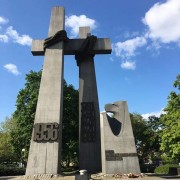 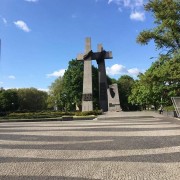 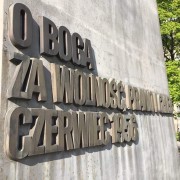 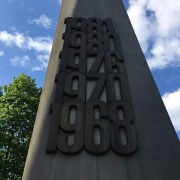 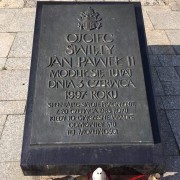 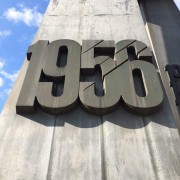