It commemorates the fighting revolutionaries, heroes of the revolutionary struggle for the People's Republic of Poland (unveiled in the XXXth anniversary of People's Poland).

The monument is located in the centre of Rzeszów at the intersection of Łukasz Ciepliński and Józef Piłsudski Avenue, near the Bernardine Monastery.

The inscriptions on the boards: "Your heroic deed - immortal fame - our infinite memory", "In tribute to the heroes of the revolutionary struggle for the People's Poland Society of the Rzeszow Land".

Two stylized, made of concrete, laurel leaves consisting of 37 pairs of elements with a total height of about 38 meters. To them two sculptures made of copper sheet were attached at a height of about 8 meters. One depicts "Nike" the goddess of victory, and the other a worker, a peasant and a soldier. Below at the feet of the figure the scratched material symbolizes the flag of the revolution. At the base of the leaves there are four marble plaques.

The idea of building the monument is attributed to the First Secretary of the Polish communist party (PZPR) in Rzeszów, Władysław Kruczek. In 1967, the Social Committee for the Construction of the "Monument to the Revolutionary Fights" was established, which undertook to commemorate in a symbolic manner the revolutionary acts and riots in the area known as the Rzeszów Land. The sculptures were made by the rector of the Academy of Fine Arts in Cracow, Marian Konieczny, who came from the Rzeszow region (among others, the creator of the Warsaw Nike). The ceremony of the monument's unveiling took place on May 1, 1974, after the May 1 parade. The commemorative speeches were delivered by Tomasz Wiśniewski, veteran of the workers' movement, and Jerzy Gawrysiak, First Secretary of PZPR. The act of unveiling the monument was performed to the sound of the national anthem and the International. Actors of the Wanda Siemaszko Theatre in Rzeszów recited revolutionary poems, numerous wreaths and flower bouquets folded at the foot of the monument by official delegations, workers' delegations and march participants.

Until the end of the People's Republic of Poland, more important ceremonies, parades, fetishes, matches, oaths, broadcasts etc. took place at the monument. In July 2002, on the initiative of the then president of Rzeszów, Andrzej Szlachta, the coat of arms of Rzeszów made of copper sheet was mounted on the monument. It is 3 m. high and 2.8 m. wide. In 2006, in accordance with the resolution of the Rzeszów City Council, the surroundings of the monument were given to the Bernardine Fathers for 1% of its value. From 2015 the monument is illuminated after dark. This happened after the requests that the author of the monument himself made to the city authorities. In recent years there has been a dispute over the future of the monument. This dispute has intensified in 2016, due to the "decommunization" law passed. According to the IPN, the monument should be demolished under this very law.

The monument evokes a lot of emotions among the residents of Rzeszów, whose opinions about the object are divergent. It is the most controversial attraction of Rzeszów, but at the same time a representative object that distinguishes the city from other Polish towns. According to the Institute of National Remembrance, the monument pays homage to "communist activity in the area of the then Rzeszów Province" and should be destroyed under the so-called Decommunization Law. In the spring of 2018, in defense of the Monument of the Revolutionary Deed, among others, the Mayor of Rzeszow Tadeusz Ferenc and the Association of Polish Architects. Several tens of thousands of people signed the petition against the liquidation of the monument. The artistic circles and art historians also expressed their opposition.  The actions taken to give the monument the status of a monument have been taken. 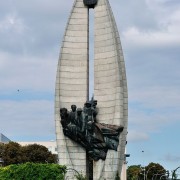 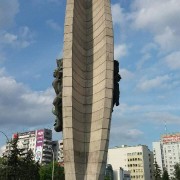 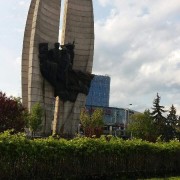 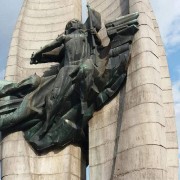 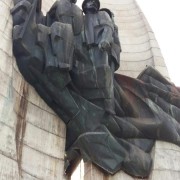 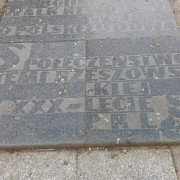