The monument commemorated the Polish communist activist Feliks Dzierżyński, after 1917 the founder of the Soviet terror apparatus and head of the first Soviet security services.

The monument to Feliks Dzierżyński was located in the centre of Warsaw at Dzierżyński Square (changed after 1989 to Bank Square).

The monument (approx. 4 m) on the pedestal (approx. 6 m), was made by Zbigniew Dunajski. The standing, cape-covered figure of Dzierżyński was made of cement, covered with brown. It was the first application of this method in monumental sculpture. The pedestal was made of Strzegom's granite. A metal bas-relief depicting a parade of workers with the SDKPiL flag was placed on the pedestal, with an inscription below.

The monument to Dzierżyński, a revolutionary activist and the creator of the Soviet security service, was to be unveiled on 20 July 1951 on the 25th anniversary of his death. This finally happened a day later, due to the later arrival of a delegation from Moscow. The monument was unveiled by President Boleslaw Bierut. Among the guests invited to the ceremony were: USSR Marshal Georgiy Zhukov, USSR Deputy Prime Minister Vyacheslav Molotov, GDR Deputy Prime Minister Walter Ulbricht, Czechoslovakian Deputy Prime Minister Anton Gregor and Konstanty Rokosowski, Józef Cyrankiewicz, Hilary Minc, Aleksander Zawadzki. Along with the replacement of the monument, the name of the square was changed from Bankowy Square to Feliks Dzierżyński Square.

On February 10, 1982, 16-year-old Emil Barchański and his colleagues poured paint over the monument and set it on fire. On 16 November 1989, in the presence of the media and the citizens of Warsaw, the demolition of the monument began. The dismantling was carried out by the Regional Directorate of Municipal Roads. After being removed from the pedestal by a mobile crane, the sculpture fell apart into three concrete segments, from which it was assembled. A segment with a head hit the square just like a part with legs. Only the trunk hung on the crane ropes. The elements after the demolition of the monument were deposited in the warehouses of the Provincial Directorate of Municipal Roads. On 29 September 2001, the Juliusz Słowacki monument was erected near the site of the Feliks Dzierżyński monument, 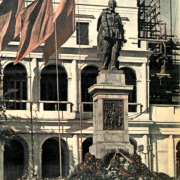 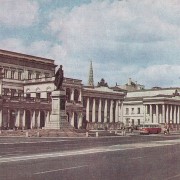 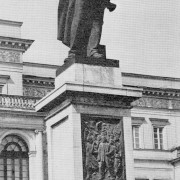