The monument commemorates the Lithuanian prince, king of Poland, founder of the Jagiellonian dynasty - Władysław II Jagiełło, who in 1410, commanding the Polish-Lithuanian army, defeated the Teutonic Knights at Grunwald.

The Jagiełło monument stands on a square in front of the Gymnasium No. 1 named after him. Nearby is the local museum.

The inscription from 1994 after reconstruction: To King Władysław Jagiello on the 650th anniversary of granting the city rights to Działdowo in 1994.

In the upper part of the plinth you can see a hand holding a sword. Its blade is directed vertically down and reaches the very end of the pedestal. At the top there is a bas-relief of the White Eagle.

At the beginning of September 1939 the monument was destroyed by the Germans. After the war, in November 1952, a monument in honour of the Soviet Army was placed in its place. Only in 1992, during the meeting of the Society of Dzialdowo Land Lovers, the idea of commemorating the victor from Grunwald again was returned. In 1993, this initiative was also taken up by a group of teachers from King Władysław Jagiełło Primary School No. 1. On 14 March 1994 the City Council of Działdowa passed a resolution and two weeks later the Social Committee for the Reconstruction of the Monument to King Władysław Jagiełło at Primary School No. 1 was established. Wojciech Jaroszewski became the Chairman of the Committee. Mayor Marian Janicki was elected as honorary chairman. A collection of money was carried out, and the project was free of charge carried out by Andrzej Walasek, an artist from Działdów, modelled on the photographs of the original. The monument was forged by a Dzialdowo craftsman Wojciech Jaroszewski. Exactly 60 years after the ceremonial unveiling of Jagiełło's first monument on 28 October 1994, a new one was presented to the inhabitants of Działdów.

The statue of Wladyslaw Jagiello commemorates the figure of the great king and his relations with Dzialdowo. The king visited the town three times during successive wars with the Teutonic Order in 1410, 1414 and 1422. It was from Dzialdowo that he set off in 1410 near Grunwald after a few days' stopover. Today, the monument commemorating him reminds of distant events and serves as a memorial, building a sense of pride of the local community from its past. Due to its modest appearance the monument has not earned the status of a tourist attraction. 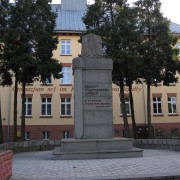 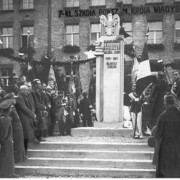