The monument is dedicated to Stach Konwa - the legendary Kurpie (an ethnographic group of the Polish population, living in the areas of Mazovian forests) hero, the leader of the Kurpie riflemen fighting the Swedes in 1708. He also fought against the Saxon-Moscow army in 1733, during the war for the Polish succession on the side of Stanisław Leszczyński. He was then taken prisoner and hanged. The execution was probably carried out in the Jednaczewski Forest.

The monument to Stach Konwa stands on the outskirts of Jednaczewski Forest near Lomza. From the side of this town the monument is led through the meadows of Grobla Jednaczewska Street. The monument can be reached by a forest road leading to the western edge of the reserve "Knight's Cross", where Konwa is probably buried. On 15 August 2001 a commemorative tombstone was unveiled there.

Here lies the Kurpie hero, Stach Konwa, who died a glorious death in 1733.

The monument was made from the trunk of several hundred years old barren pine. It is crowned with a wooden, hipped, pointed roof with green tiles, finished with a spire. Below is a recess where a folk statue of the Sorrowful Christ is carved. Between the recess with Christ and the inscription placed on the rectangular recess there is a deeply carved cross. The monument was placed on a platform made of magnificent field stones flooded with cement. From the front there are two steps of different sizes. The appearance of the monument fits perfectly into the forest surroundings. Unfortunately, it is disfigured by vandal signatures.

The initiator of the erection of the monument in the Jednaczewski Forest, where Konwa was probably killed, was a researcher of the Kurpie region, the founder of the Kurpie Museum - Adam Chętnik. He also contributed to the dissemination of information about Konwa through his publications. On the occasion of the unveiling of the monument, he published a brochure entitled 'The Kuba's life'. "At the time of the unveiling of the monument, he published a brochure entitled 'Stach Konwa, the great patriot of the Lomza Land, a conqueror of Swedes, Saxons and Moscovians'. The fact that before the First World War the memory of the Konwa was cherished in Lomza was also significant. The local National Party used its legend in its educational activities, emphasizing the merits of the Kurpie people in the struggle to defend Polish independence. Funds for the construction of the monument were collected through the local magazine "Gość Puszczański", published by Chętnik in Nowogród. The author of the design of the monument was the architect Rudolf Macura, who comes from Ostrołęka. It was made by foremen from Novgorod. The ceremonial unveiling took place on 25 June 1922 in the presence of MPs to the Sejm of Jan Zamorski, Jan Załuski and Adam Mieczkowski. On this occasion, the parish priest of Kuzie, Father Piotr Krysiak celebrated a mass and the solemn speech was given by Chętnik. The importance of the patriotic celebration is best evidenced by the fact that not only Kurpie from the vicinity of Jednaczewo, but also around 10 thousand inhabitants of Łomża, Ostrołęka, Kołoński and Przasnysz counties came to the ceremony.

After the unveiling of the monument, it was agreed that it would be visited by official delegations each year in June "on the first Sunday after St John". The Konwa Monument has also become one of the stops for excursions organized by the Polish Tourist Association. The President of the Kurpie Branch of PTK in Nowogrod was Adam Chętnik. The monument was destroyed by the Germans in 1939 but the memory of the hero did not disappear. The partisan units fighting in the Kurpie Region during World War II took the name of Stach Konwa, and some partisans took the pseudonym "Konwa". In 1965, a replica of the monument was made, which was placed in the open-air museum in Nowogród in Kurpie. At the same time, a reconstructed monument was also erected in place of the original - in the Jednaczewski Forest. In the mid-1990s, its pine pedestal was burnt by vandals. The new one was erected by members of the Society of the Friends of Lomza Land. For this purpose, the vice-president of the Society, Wawrzyniec Kłosiński, was given a big brick by a forester from Jednaczew. The Society reconstructed the burnt monument with its own efforts. Unfortunately, nowadays, it is deteriorating again and is being devastated by vandals.

The monument to Stach Konwa played an important role in shaping and maintaining the memory of the legendary Kurpie hero. In the local social consciousness Stach Konwa functions as a brave leader of the people, a patriot fighting the invader. At the same time, he also wrote himself down in the memory of the Kurpie people as a defender of the peasants, fighting against the serfdom. The monument is mentioned in tourist guides to Podlasie - as a place worth seeing. 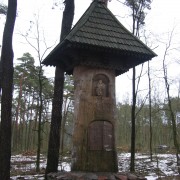 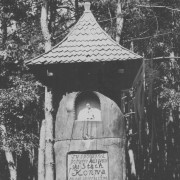 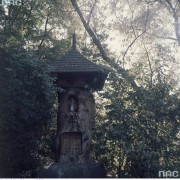