Obelisk at the Border of the Partitions

The monument commemorates the moment of crossing the border between the Russian and Austrian partitions on 6 August 1914 at 9:45 a.m. by the First Staff Company of the Polish Legions. The 144-person military unit was given by Józef Piłsudski the task of provoking an anti-Russian uprising in the Congress Kingdom. The route of the march started from Oleandrów in Cracow led towards Kielce.

The monument stands in the village of Michałowice, located 15 km from Krakow. On the border separating the Russian and Austrian partitions. On the place of the former customs chamber and border posts, on the E7 road.

At this point, on the order of Commander Józef Piłsudski, the First Cadre Company of the Polish Legions, on 6 August 1914, going into battle for the honour and freedom of the homeland, overthrew the border posts of the former partitioning countries.

The statue is placed on a stone, square platform. At its top there is an eagle of the Riflemen's Union, made of Pińczów limestone. It is a symbol of the crossing of the border of the partitions on 6 August 1914. It is also present in the coat of arms of Michałowice. Its wings are raised and spread. His claws are based on an Amazon shield, on which there is a shield of the coat of arms with the letter "S", meaning " Rifleman" ("Strzelec"). The members of the Riflemen's Association wore the image of this eagle on a cap - called maciejówka.

Obelisk on the Border of Partitions was established in the village of Michałowice on the initiative of the Association of Polish Legionaries and the Federation of Polish Unions of Homeland Defenders. Both of these organizations funded it from contributions collected among members. The author of the project remained anonymous. The unveiling took place on the 18th anniversary of Poland's regaining independence on November 11, 1936. The whole ceremony was given a lofty and patriotic setting. The flagship post offices of the Riflemen's Union and the Volunteer Fire Brigade of Michałowice took part in the ceremony. The post offices were also accompanied by scouts and participants of the annual March along the Trail of the First Cadre Company. The representatives of administrative and church authorities and the higher commanding staff of the Polish Army were present. The starost, a representative of the Cracow voivode, Dr. Wladyslaw Wnęk accepted the report and went before the honorary company. Whereas Dr. Wladyslaw Stryjenski, a legionary who started the combat route in the First Cadre Company, made a solemn speech. The military orchestra played the anthem and the legionnaires' songs. The ceremony was also attended by the inhabitants of Michalowice and the audience came from Krakow and Kielce.

The Obelisk on the Border of the Partitions survived the war and post-war times without any damage. In 2004, it was moved a few metres away and placed on a new pedestal, a little further from the road. This increased safety on the E-7 route and protected the monument from damage. It was also reinforced with steel elements and the cavities were filled with concrete. However, these were only temporary solutions. It is planned to be completely renovated.

The obelisk in Michałowice invariably commemorates an extremely important moment for the legend of Piłsudski's legions, when the First Cadre Company under the command of Tadeusz Kasprzycki symbolically started a fight with the Russian partitioner to regain Poland's independence. The tradition of the annual March along the Trail of the First Cadre Company is closely connected with the monument. Although the first one took place already in 1924, after the obelisk was erected, it became an important element of this undertaking. After World War II, the communist authorities banned the march. Its tradition was renewed in 1981 by the still living legionnaires and young activists of "Solidarity" and the Confederation of Independent Poland. Since then, participants of the march have stopped at the monument every year. When the footmen reach the obelisk they take part in a solemn appeal. The ceremony is crowned with a picnic, historical competitions, sports competitions, field games and concerts. Despite its location, the Obelisk on the Border of Partitions has become an important place of remembrance for those who identify themselves with the independence and pisłudczywkowska tradition, as well as a local tourist attraction. 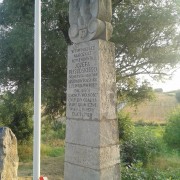 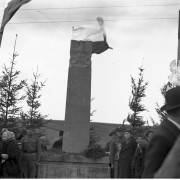 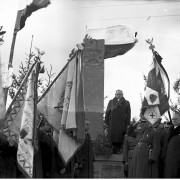 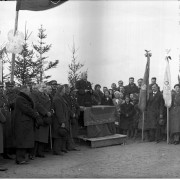 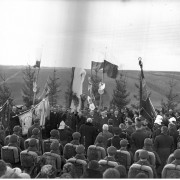