The monument was dedicated to Vladimir Ilyich Lenin (1870-1924) - Russian communist politician, organizer and leader of the October Revolution, and then the first leader of Soviet Russia. He was one of the main responsible for the terror and mass murders that began after 1917 on the territory of the former Russian empire and surrounding countries.

The monument was erected in front of the "Wańkówka" tavern, which was turned into the Lenin Museum by the communist authorities after World War II.

The whole-shaped monument was cast in bronze and weighs 3 tons. Lenina was wearing a well-cut suit. Under the jacket he has a vest, a shirt and a tie. His hands are in his trouser pockets and his coat is hung over his right forearm. The body weight is transferred to his right leg, the left one is put back slightly, as if he wanted to step forward.

The monument to Vladimir Lenin stood in Poronin due to a misunderstanding. In June 1912, the Bolsheviks' chief settled down with Nadezhda Krupska and her mother in Krakow. Living near the border, he was able to maintain contact with the Bolshevik party activists in Russia more easily. He often visited Zakopane and lived in Biały Dunajec. When in 1947 the Polish-Soviet Friendship Society began preparations to honour the USSR founder's stay on Polish soil, it received misleading information that he lived in Paweł Gut-Mostowy's tavern in Poronin. The "Wańkówka" inn was nationalized and turned into the Lenin Museum opened on November 6, 1947. Only later it was established that the leader of the revolution lived in Teresa Skupień's house in Biały Dunajec. Soon it became a branch of the museum. In the meantime, a building was erected near the tavern, dedicated to educational activities and a monument to Lenin was erected. Officially, it was a gift from Leningrad workers to Poronin. The statue of Lenin was designed by the Stalin prize winner, Russian artist Dmitry Szwarc. It was cast in Leningrad (today St. Petersburg) and from there it was transported to Podhale. The ceremonial unveiling took place on 23 July 1950.

The Lenin Museum in Poronin and the monument in front of it were a must-see for trips to Zakopane. This applied both to tourism organised by the state in Poland and to foreign groups. Anniversary ceremonies connected with the person of Lenin and dates important for the communist regime were regularly held at the monument. When the 100th anniversary of the revolutionary leader's birthday was celebrated in the Polish People's Republic in 1970, members of the underground organization "Ruch" planned to set fire to the museum and blow up the monument. The bombers, led by brothers Andrzej and Benedykt Czuma, Marian Gołębiewski and Stefana Niesiołowski, did not know that "Ruch" was under surveillance by the Security Service. The day before the attempt, the Security Service detained 24 people connected with it. The leaders soon received long sentences. However, they were followed by Primate Stefan Wyszyński and Metropolitan of Cracow Karol Wojtyła. And in mid 1974, an appeal to the State Council to pardon the prisoners was signed by several famous figures: Prof. Edward Lipiński, Antoni Słonimski, Zbigniew Herbert, Władysław Bartoszewski, among others. In September 1974, the Council of State granted amnesty to members of "Ruch". After the fall of communism, the Lenin Museum in Poronin was closed down, and a cultural centre was established in the building given to the commune. The monument was removed from the pedestal, ripped its arm off, and then transported to the Museum of Socialist Realism in Kozłówka near Lublin. However, the memory of this local tourist attraction made councillor Anna Malacina propose to reconstruct the pedestal in 2011 during a session of the Poronin Municipal Council. This was supported by Kazimierz Czekaj, regional councillor, chairman of the budget committee. After a stormy dispute about the extent to which the Lenin monument will glorify the figure of the criminal, the idea fell. In 2014, local artist Sławomir Cudzich-Bularz carved a copy of the Lenin monument from wood and placed it at his house in Poronienie. A year later, an unknown person used a saw to cut off the wooden Lenin's head.

The Lenin Monument in Poronin (together with the museum dedicated to the revolutionary leader) was one of the important elements of creating a narrative about the close links between Poland and Poles and the communist movement. At the same time it served to mythologize the figure of Lenin as a model of a politician, leader and person. Building the memory of him according to the official propaganda message, strictly controlled by those in power. However, in the perception of Poles, skeptical of the regime, the monument remained a foreign body, symbolizing Poland's submission to Russians. It aroused hostility, and at the same time many jokes and anecdotes were made about it. This did not change the fact that it became a symbol of Poronin and so strong that, although its removal did not meet with opposition, the memory of it is rooted in the memory of the local population and still arouses emotions. 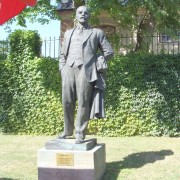 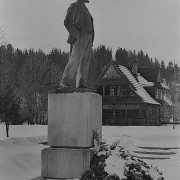