Monument to Napoleon I Bonaparte

The monument is dedicated to Napoleon I Bonaparte.

The monument is located on the Square of Warsaw Insurgents (formerly known as Napoleon's Square), at the exit of Warecka Street.

Inscription on the stone slab at the bottom of the plinth: Monument reconstructed May 5, 2011 in the place where the first monument to Emperor Napoleon I in Warsaw was erected May 5, 1921

The monument made of bronze has a form of a bust. Its total height is about 4.5 m. It represents Napoleon, who stares at every passing person. He is dressed in a uniform. On the left side, on the chest you can see the National Order of the Legion of Honour. This is the highest award given by France for special military achievements. On his head he has a characteristic hat called a bikorn, worn in the 18th and 19th century, especially in the army and navy. On a bright, granite plinth, right next to Napoleon, there are two eagles preparing to fly. On the plinth you can see a crown made of bronze, just below it, with the initials of Napoleon made of the same material. On the pedestal, at the back, there is a plaque informing that the monument is a gift from the French community in Poland, the patrons and founders of the project are mentioned, and there is a note that the monument is a reconstruction.

After Poland regained independence, gratitude for the support given by France and unflagging sympathy for Bonaparte motivated the Warsaw authorities to commemorate the French Emperor. On the 100th anniversary of his death on 5 May 1921, Napoleon's bust was placed on the pedestal on Warecki Square. It was carved by Jan Antoni Biernacki, Professor of Modelling at the Municipal School of Decorative Arts. It was soon celebrated by the change of name of the square to Napoleon. However, the pedestal started to disintegrate and a few months later it had to be dismantled. The second monument, consisting of a bust and a pedestal, was designed by a professional soldier and at the same time by Major Michał Kamieński, a sculptor. It was made by the "Łopieńscy Brothers" workshop. At Piłsudski's request, it stood in front of the entrance to the building of the Higher War School at 79 Koszykowa Street. The ceremonial unveiling took place on 3 May 1923. It was honoured with the presence of Józef Piłsudski and Marshal Ferdynand Foch, who had been awarded the title of Polish Marshal three weeks earlier.

The statue of Napoleon Bonaparte quickly became a recognisable sign of the Higher War School. It was customary for officers to take collective photographs underneath it. The monument survived the German occupation and the Warsaw Rising, but was dismantled by the communist authorities of the capital just after World War II. The bust, which was taken off at that time, was sent to the Polish Army Museum in Warsaw. In the 1960s, it was placed in the inner courtyard of the museum. Fifty years later, the idea to reconstruct the monument was born in the Polish Section of the Association of Mutual Assistance of Members of the Legion of Honour. It was animated by the president of the section, Jean Caillot. Its members raised funds for the reconstruction of the monument among the French living in Poland. The consent to honour Bonaparte again was given by the Council of Warsaw in early 2011. A faithful replica of the destroyed monument was made by sculptors Paweł Pietrusiński and Marek Żebrowski. The reconstructed monument was not located on Koszykowa Street, but in the place of its first location on the former Napoleon Square, now Warsaw Insurgents Square. The unveiling on the 190th anniversary of the death of the French Emperor on 5 May 2011 was attended by the Ambassador of the 5th Republic, Francois Barry Delongchamps, and former Prime Minister Tadeusz Mazowiecki, representing the President of Poland. The ceremony was honoured by the honorary branch of the 2nd regiment of French hussars. Whereas the preserved original of Bonaparte's bust in 2017 was borrowed from the Polish Army Museum by the Academy of War Art.

The Poles' sentiment to the person of Bonaparte was very strong after regaining independence. France aroused similarly warm feelings. Both of these factors resulted in a very quick creation of the monument to Emperor Napoleon. In the times of the Second Republic of Poland it served as a symbol of Polish-French friendship. At the same time, it commemorated the historical figure that was adored in Poland. Its symbolic meaning, as well as reminding about the common struggle of Poles and French against Russia, made the communist regime not accept the existence of the monument in public space. After the reconstruction, the monument fulfils its original functions, bringing the Poles and the French closer together. Due to its rich history it has also become a tourist attraction, described in Warsaw guides. 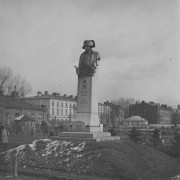 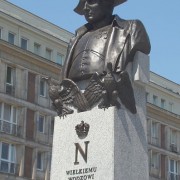 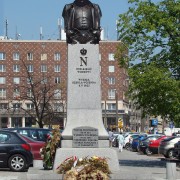 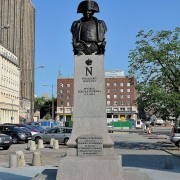 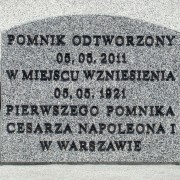