The monument is dedicated to Prince Józef Poniatowski (1763-1813), nephew of the Polish King Stanisław August Poniatowski. The participant of the war in defense of the 3rd of May Constitution, the Kosciuszko Uprising, the Commander-in-Chief of the Army of the Duchy of Warsaw, the hero of the Napoleonic Wars, the Marshal of Poland and France.

The monument is located on the eastern side of Krakowskie Przedmieście Street, in the courtyard in front of the Presidential Palace.

The bronze monument measures 350 cm high and 150 cm wide. It was placed on a rectangular pedestal consisting of 3 rows of grey stone blocks, 350 cm high and 150 cm wide, set on a low base. It represents a muscular prince sitting on a horse. In his right hand, straight forward, he holds a sword, as if pointing the direction of the attack. In the left hand, he holds a tense lead, attracting the head of the horse towards himself. The animal's right front leg is bent and lifted up. From under the rider's left hand the scabbard of the sword sticks out pressed to the side, its end is richly decorated. The prince is dressed in a short tunic, a spiked belt, a Napoleonic eagle can be seen on the breastplate. He has a coat on his shoulders, which falls on the sides of the steed. On his feet there are Roman sandals with thongs tied over his ankle. The prince looks to the left. His head is covered with dense, tiny curls, a short moustache on his face. The design of the monument was based on the famous horse statue of Emperor Marcus Aurelius, made in 175 AD, erected on the Roman Capitol.

After the death of Józef Poniatowski in the battle of Leipzig, an idea was born to honour him with a monument. The initiative was taken up by the Tsar's advisor, Duke Adam Jerzy Czartoryski. He sent his niece, Duchess Anna Potocka, to negotiate with Alexander I. The Emperor agreed, showing his graciousness to the dead enemy. Czartoryski was the head of the monument's foundation committee, and General Stanislaw Mokronowski took over the organizational matters. The sculpture project was commissioned from the famous Danish artist Bertel Thorvaldsen. When he was a few years late with the project, a rumour spread in Warsaw that he stopped sculpting the prince because the monument to Tsar Alexander has priority. Public opinion was boiling. Czartoryski intervened personally with the sculptor. It was not until the autumn of 1828 that a plaster model of the monument was presented to the public. The younger generation decided that Poniatowski in Roman armour instead of a uniform was proof of the servilism of the Kingdom's elite towards Russians. Not even the Napoleonic eagle on the armour of the prince's armour helped. Due to a brawl, the deadline for casting the sculpture was delayed. When Claudius and Emil Gregoire's workshop finally cast the monument, the November Rising broke out. After his defeat, Tsar Nicholas humiliated the Poles by donating a monument that had been dismantled earlier and moved to Modlin Fortress to Field Marshal Ivan Paszkiewicz. The conqueror of Warsaw took the monument to Homel, where it was placed in front of his palace. The treaty signed in March 1922 with Bolshevik Russia in Riga obliged the Kremlin to return the pedestal. At that time, disputes over where it should stand began in Warsaw. Piłsudzki cut them off, deciding that the prince would stand on Saski Square opposite the General Staff headquarters where he resided. The ceremonial unveiling of the monument took place on the anniversary of the first constitution of 3 May 1923. It was unveiled by President Stanisław Wojciechowski and General Kazimierz Sosnkowski. In the audience, the main place was taken by Piłsudski, accompanied by French Marshal Ferdinand Foch.

The Poniatowski monument was blown up after the fall of the Warsaw Rising by German troops. The communists, when they took power in Poland, did not plan to reconstruct it, even though a plaster model of the pedestal stood in the Thorvaldsen Museum in Copenhagen. In 1948 the Danish government decided to finance the casting of the new monument. It was made under the direction of Paul Lauritz Rasmussen. Then, in 1951, Denmark donated the monument to Prince Joseph to Poland. President Bolesław Bierut decided that the troublesome gift would be placed in front of the Orangery in Łazienki Park. The discreet unveiling was carried out by low-level officials in February 1952. Despite "hiding" the monument in the park, the Varsovians did not forget about it. With the political thaw in 1956, the demands for it to return to the exposed place were revived. The idea of moving it to the place where the government of the Polish Kingdom originally planned to place it, i.e. in front of the Namiestnikowski Palace, was pushed through by the director of the National Museum, Professor Stanisław Lorentz. But the building was renamed the Palace of the Council of Ministers and it was occupied by Prime Minister Józef Cyrankiewicz. The placing of an aristocrat fighting against the Russian invader under the windows of the communist government was a heresy. Nevertheless, Cyrankiewicz was convinced and on 16 October 1965, on the 152nd anniversary of the Battle of Leipzig, the monument was taken from the Łazienki Park. Two days later, it stood in front of the Palace of the Council of Ministers on a pedestal designed by Zygmunt Stępiński.  After the fall of communism in Poland, the Namiestnikowski Palace returned to its old name, and from 1994 it became the seat of successive Presidents of the Third Republic of Poland.

Very vivid emotional reactions of Poles were aroused by the Poniatowski monument before it was built. They always resulted from the fact that the figure of the heroic prince was inseparably connected with the memory of the struggle with the Russian invader. If there was a suspicion that this most important topic was being weakened or concealed by the authorities, it aroused violent opposition from citizens. It happened both in the times of the Kingdom of Poland and in the People's Republic of Poland. For this reason, the monument played the role of a very important political, national memorial. Although important state ceremonies took place there only during the Second Polish Republic. It was only nowadays that its political role was weakened, in favour of being a tourist attraction. What is the reason for the impressive form of the monument, its extraordinary history and the fact that it is the work of Bertel Thorvaldsen. It is significant that, according to the original intention, it has become a symbol of the residence of the most important person in the country. At the same time it is one of the most recognizable symbols of Warsaw. The fact that the Poniatowski monument is present on numerous: postcards, gadgets, brochures, etc., promoting the capital. It was also an inspiration for writers, poets, painters, composers and other cultural creators who immortalized it in their works. 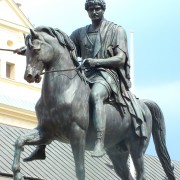 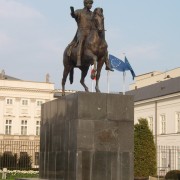 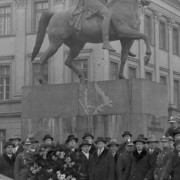 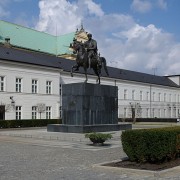 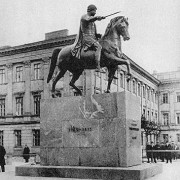 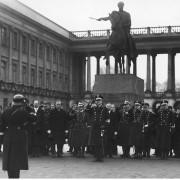 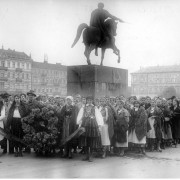