The monument is dedicated to General Elżbieta Zawacka. She took part in the defense of Lwow during the 1939 Defense Campaign, during the occupation she was a Home Army courier and the organizer of the structures of the Women's Military Service in Silesia, the only woman who was 'Cichociemna' (specially trained in the United Kingdom and Italy soldiers of the underground Home Army). After the war she was a member of the underground Association for Freedom and Independence, repressed by the communist regime. In 1951 she was sentenced to 10 years in prison, released 4 years later. Later she was involved in scientific research in the field of pedagogy. In 1996 she was granted the title of professor. She received the rank of Brigadier General in 2006.

The monument is located in the northern part of the Old Town Complex, at Podmurna Street, in front of the General Elżbieta Zawacka Foundation, the Archive and Museum of the Pomeranian Home Army and the Polish Army Military Service.

The monument is made of bronze and depicts an 80-year-old Elżbieta Zawacka sitting in an armchair covered with a blanket. Her eyesight is directed at passers-by. She is holding glasses in her right hand and touching a book lying on a round table with her left hand. She is dressed in a shirt, skirt and vest to which the decorations are attached: The Home Army Parachute Mark, a symbol of military rank, the Order of the White Eagle and Virtuti Militari. Just behind the monument, on the wall of the General Elżbieta Zawacka Foundation building there is a biographical note in Polish and English.

The idea of building the monument was put forward by the Board of the General Elżbieta Zawacka Foundation, which was established in 1990. The initiative was supported by the authorities of Toruń and the regional government. The funds were collected by the Foundation in a public collection, and the monument was designed by a Toruń sculptor Tadeusz Porębski. It was originally planned that the statue of Gen. Zawacka would be planted on a bench, but Porębski considered this solution to be too often repeated. He replaced the bench with a chair. The finished monument was ceremonially unveiled on 26 September 2014, on the occasion of the celebration of the Polish Underground State Day, accompanied by scouts and the honorary company of the Polish Army. The ceremony was held under the patronage of the President of the Republic of Poland Bronisław Komorowski, whose letter was read during the unveiling of the monument.

The monument to Elżbieta Zawacka commemorates Ms. General and her relationship with the city where she was born on 19 March 1909 and died 100 years later in 2009. After World War II, in Toruń Zawacka developed the activities of the anti-communist organization 'Wolność i Niezawisłość'. Arrested by the Security Service, she spent the years 1951-1955 in prison. After being released, she left Torun to return in 1972. She took up a job at the Nicolaus Copernicus University in the Institute of Pedagogy and Psychology. She was active in the environment of Home Army veterans. The monument not only recalls her colourful and very important role in the city, but also honours the Polish Underground State and the post-war, anti-communist conspiracy. It is a memorial point at which ceremonies are organized to commemorate the Home Army and WiN. It has quickly become a tourist attraction promoted in guides. 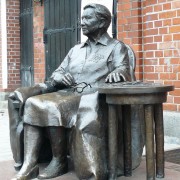 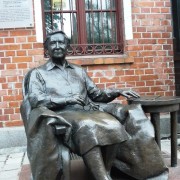 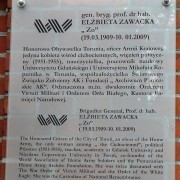