The monument commemorates Jan Kiliński - one of the leaders of the Kościuszko Rising (1794).

Currently, the monument stands on Podwale Street at the exit of Piekarska Street, by the defensive walls that surround the Old Town.

Jan Kiliński, leader of the people of the capital city in 1794. Compatriots in 1934.

The 3-metre-high monument was made of bronze and set on a pedestal of Finnish granite, measuring 4 m in height. It depicts Jan Kiliński in a cap, in a long coat, adorned with a wide band behind which the pistol was placed. A sabre scabbard is attached to the belt, located at the back and reaching the base of the plinth. With his right hand raised high, in which he holds the sabre, and with his left fist clenched, he looks as if he was going to assault.

With the initiative of erecting a monument to Jan Kilinski in the capital city, on the 140th anniversary of the outbreak of the Kosciuszko Insurrection came the Guild of Leather Crafts. Supported by the Warsaw Chamber of Crafts and the Mayor of the city Stefan Starzyński. President of the monument construction committee was Paweł Nowicki. The design of the monument, commemorating the heroic shoemaker, was prepared by the outstanding sculptor Stanisław Jackowski. Its construction was completed in 1935 by the "Łopieńskis Brothers" workshop. The pedestal was prepared by Jan Fedorowicz's stone company. The material was made of Finnish granite from the destroyed St. Alexander Nevsky Cathedral in Saski Square. On the front of the pedestal there is a bas-relief plate by Walenty Smyczyński. It depicted Kiliński leading the people to fight through the Castle Square. The monument stood on Krasinski Square. The ceremonial unveiling took place on 19 April 1936, on the 30th anniversary of the Warsaw Chamber of Crafts. The Mayor of the Republic of Poland Ignacy Mościcki and the Mayor of Warsaw Stefan Starzyński personally arrived. An army company assisted them. After the end of the ceremony, a parade of representatives of all Warsaw guilds carrying symbols of their profession passed through the streets.

The Kiliński monument survived the undamaged siege of Warsaw in September 1939. Initially, it did not arouse the occupier's interest because of its anti-Russian pronunciation. However, when in February 1942 Aleksy Dawidowski, aka "Alek", took the German plaque off the Nicolaus Copernicus monument, in retaliation the Warsaw District Governor Ludwig Fischer ordered to remove the pedestal of the hero of the Kościuszko Insurrection. Thanks to the efforts of the director of the National Museum, Stanisław Lorentz, the monument was not destroyed, but was stored in the museum warehouse. Soon, "Alek" Dawidowski made an inscription on his wall: "I am here for the people of Warsaw. Kiliński Jan!". There were also numerous jokes and humorous poems about the imprisonment of the shoemaker by the Germans. Thanks to the removal from the pedestal Kiliñski survived the Warsaw Rising, although he lost his sword and was slightly damaged. After the war the renovation was carried out by the workshop "Bracia Łopieńscy". Then, in September 1946, he returned to Krasiński Square. In 1959, officially at the request of the Chamber of Craftsmen, the monument was moved from an exposed place to a small square at the junction of Podwale and Piekarska streets. According to the justification that there used to be a building of the Russian embassy nearby, which was attacked by Kiliński. However, there are many indications that the monument was "hidden" due to associations with the Russian occupation. During the relocation the new pedestal in the form of a prism was made by a nationalised company of Jan Fedorowicz. The bas-relief plate by Walenty Smyczyński, donated to the Historical Museum of Warsaw, has also disappeared.

Since its inception, the Kiliński monument has been an important symbol for the residents of Warsaw, as well as for all Poles. It resembled not only the figure of the legendary shoemaker, but also commemorated a key moment of the Kościuszko Insurrection. When the people of the capital liberated the city from the Russian occupation. The monument also became a symbol of the struggle for Polish independence. At the same time, it reminded of the importance of preserving the national unity of Poles across class divisions. Such rich symbolism was the cause of the numerous misfortunes that affected the monument during the German occupation and the rule of the communist regime in Poland, from the granting of Moscow. The memory of the "adventures" of Kiliński made the monument a tourist attraction of the capital, described in all the paper and internet guides to Warsaw. He also became the protagonist of press articles, historical monographs, popular science and fiction books, documentaries and feature films. He is widely recognized and placed on postcards, T-shirts, badges and numerous gadgets for tourists. It also continues to serve as an object of memory evoking patriotic feelings of Poles. 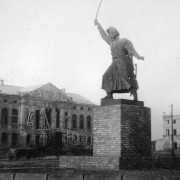 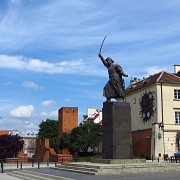 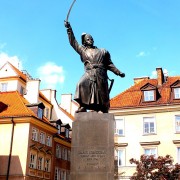 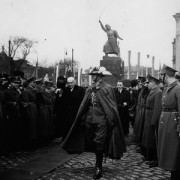