The monument is located on the church square, in the center of the village of Dąbrówka Kościelna, located in the municipality of Szepietowo.

To the Fighters for the Independence, members of Polish Military Organisation, 1914-1918-1920.

The cement monument was placed on a tall, triangular platform. The top of the pedestal, which has the shape of a column, is crowned with a sphere on which the eagle, which breaks off to fly, is placed. There is a commemorative information board at the monument. It describes its history and the circumstances of its first and second unveiling. On the right-hand side of the pedestal, a carved commemorative badge of the Polish Military Organisation appears to the eyes of passers-by. It was awarded to veterans of this organization. The badge was also called the P.O.W. Badge or the P.O.W. Cross. The badge has the form of a bachelor's cross. There are convex letters on the shoulders: "P", "O" and "W" and the date "1918", while in the middle the initials of Józef Piłsudski: "JP", and between the arms triple rays. The monument is surrounded by a chain attached to stone pillars. In 2017, after the restoration of the monument and the square around it, a cross with the dying Christ was hung on the pedestal.

The initiative to build the POW monument in Dąbrówka Kościelna was announced on the 10th anniversary of regaining independence - in 1928. The ceremonial unveiling of the monument took place on 30 August 1936. The initiator of the ceremony was Bolesław Sztyler, the deputy commander of POW in Wysokie Mazowieckie during the First World War, and then the head of the Fire Brigade in 1920-1935. The ceremony was attended by the starost of Wysokie Mazowieckie, Józef Świątkiewicz, veterans from the Polish Military Organisation and members of other organisations. As it was noted on the memorial plaque placed at the monument, it was made for the funds collected by "brothers from POW, headed by their commander - the hero from 1920, a handicapped Captain Bialy". The unveiling was accompanied by occasional speeches and a service. At the end of the ceremony, as recorded on the memorial plaque: "Three shouts in honour of the brightest Republic of Poland, the President and the Commander-in-Chief" were made by all those present, headed by the POW memebers.

The White Eagle Monument survived World War II without any damage. In 2017, thanks to the efforts of Mayor of Szepietów - Robert Wyszyński, the monument was thoroughly renovated with the revitalization of the surrounding square. On 6 May 2018 it was unveiled again. The ceremony was opened by a patriotic spectacle prepared by primary school students from Szepietowo municipality. Afterwards, a mass was celebrated for the intention of the fallen in defence of their homeland. The participants, accompanied by orchestra from Szepietowo, went to the monument. After raising the flag on the mast and singing the anthem, the Commander-in-Chief of the Historical Association of the Polish Military Organisation, Lieutenant Colonel POW Piotr Augustynowicz and the Mayor of Szepietów cut the ribbon. Then the monument was consecrated and the memorial appeal was read. The scouts lit candles with the fire of independence. Wreaths were laid and occasional speeches were heard.

The monument plays a significant role as a local memorial. Although it is dedicated to an underground organization that does not play a leading role in the history of the struggle for Polish independence, it is still a place where all patriotic celebrations are held. This is due to the fact that the monument began to be perceived in the Szepietowo commune as a symbol, paying homage not only to the members of the Polish Military Organisation. It took on a more universal meaning, showing honour to all heroes of the independence struggle. Nowadays, it can be found on the pages of tourist guides in Podlaskie Voivodeship as an attraction worth seeing. 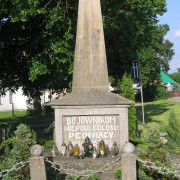 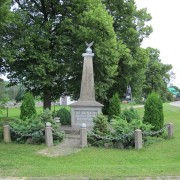