Monument to the Legionaries Fallen for Poland

The monument commemorates the creation of the Silesian Legion, also called Cieszyn Legion, on 8 August 1914. It had about 600 volunteers from Cieszyn Silesia and the Moravian Borderland. The Legion was incorporated into the Eastern Legion. As a part of the Second Brigade of Legions under the command of General Józef Haller, it participated in all war campaigns in the Carpathians and Bessarbia, Bukowina and Volhynia. Four of the sixteen cartouches on the plinth are dedicated to Polish soldiers killed in the Polish-Czechoslovak War 1919-1920.

The monument is located at Zamkowa Street, at the foot of Castle Mountain, against the background of the duke's castle, near the border bridge.

"You have come to the victory call, you - the armour of our Silesian land, blood and tears of the Polish people, you - the Silesian guard" - Jan Łysek

The inscription on the pedestal: To the Silesian Legionnaires who fallen for Poland (added in 2008 after the unveiling again)

The monument made of bronze and granite represents the goddess of victory Nike, 2 m and 15 cm high, placed on a high pedestal. The Cieszyn folk costume in which she is dressed and her lush, long hair look as if it is blowing in the wind. In her right hand, raised to the side, she holds a sabre, while the left hand is raised. On the plinth there is a plaque commemorating and depicting the infantry attack under the command of Lieutenant Jan Łyska and his poem. On the sixteen cartouches placed around the plinth, there are names of towns in the Eastern Borderlands, where the Silesian Legion fought. The four cartouches were dedicated to the Polish soldiers who fallen during the Polish-Czechoslovak War in the years 1919-1920. There were the names of the towns of Cieszyn Silesia, where major battles with the Czechs were fought during this conflict: Bystrica, Karviná, Bogumin and Skoczów.

In the early 1930s, the concept of erecting a monument to commemorate the volunteers from the Cieszyn Land fighting in the Legions was developed in Cieszyn. However, the author of the design of the monument, Prof. Jan Raszka (a volunteer legionary), decided that it should be dedicated not only to the legionaries, but also to the participants of the Silesian Uprisings and those who died during the fights with Czechoslovak troops over Zaolzie. Finally, Professor Raszka designed the Silesian Nike. On the 20th anniversary of the march out of Cieszyn of the Silesian Legion on 28 October 1934 the monument was unveiled by the Silesian Voivode Michał Grażyński. He did it in the presence of veterans from the Silesian Legion, representatives of state institutions and about 15 thousand spectators. On the same day, Głęboka Street, where the pedestal was placed, was renamed the Legions Street. Since then, the monument has become a key memorial in Cieszyn. It was used to celebrate all major national anniversaries. The importance of this fact was noticed by the Germans. The monument was demolished as early as September 1, 1939, immediately after Cieszyn was occupied by the Third Reich.

After the demolition of the Silesian Nike, a pot with agave was placed in its place. However, Polish scouts managed to hide the metal elements of the monument and the cartouche. They were found after the war, during the demolition of the house at 20 Przykopa Street. They were sent to the Scouts' Chamber of Tradition. On the place of the Silesian Nike, the communist authorities erected a "Monument of gratitude to the Red Army". It was pulled down in 1989. The place was empty for a long time until the municipal authorities began to consider the idea of placing a fountain on the square. This mobilized history enthusiasts to set up in March 2003 the Committee for the Reconstruction of the Monument of the Silesian Legionaries. Zbigniew Cichomski became its chairman. The Committee managed to invite Professor Raszka's daughter Danuta Bielecka to join it and to collect the sum needed to rebuild the monument. The inhabitants of Cieszyn have donated 90 thousand zlotys for this purpose. The reconstruction of the figure was done by a sculptor from Cieszyn, Prof. Jan Herma. While the work continued, in October 2005, Josef Byrtus, Consul General of the Czech Republic in Katowice, met with the Committee representatives. He tried to persuade the Polish side to resign from placing on the plinth four cartouches saved by the scouts, dedicated to the victims of the Polish-Czechoslovak War 1919-1920. This request was rejected. The unveiling of the reconstructed Silesian Nike, cast by Gliwice Technical Equipment Plant, took place on June 7, 2008. The monument quickly regained its importance as a key memorial in Cieszyn.

Both until 1939 and after reconstruction since 2008. the monument is a very important place of collective memory for the inhabitants of Cieszyn. Anniversary celebrations, related to Poland's regaining of independence, Silesian uprisings and other important events from the past, are organized near the Silesian Nike. Also, the fact that the pedestal has gained several common names, such as "Cieszyn Nike" or simply "Ślązaczka" (due to the folk costume of Cieszyn, in which a female figure on the monument is dressed), proves that it is a recognizable symbol for the inhabitants of the entire region. It has also become a tourist attraction, described in all guides concerning the city of Cieszyn. 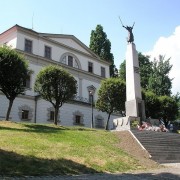 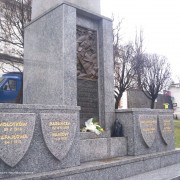 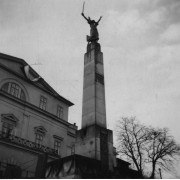 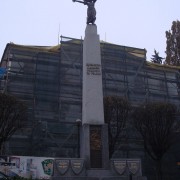