The monument is dedicated to Józef Kuraś (pseudonym "Orzeł", "Ogień") and his subordinates. Kuraś was a soldier of the Polish Army, Home Army and Polish Underground State, an officer of Peasant Battalions, but also for a short time the head of the Poviat Security Service and the organizer of the Citizen's Militia. From where he deserted with most of his subordinates. He wrote himself down in the collective memory as a partisan fighting in Podhale, first with the German occupier and then with the communists.

The monument is located in Lech Kaczyński Park on Kościuszki Street, opposite the bus station.

They gave their lives for Poland's independence and human freedom

"Let us not let the fallen die" - Zbigniew Herbert

The plinth is in the form of stones piled in a pile of different shapes. Around the stone slabs there are the names of the fallen soldiers from Józef Kuraś's unit who fought in the years 1943-1950. At the very top, there is a bronze eagle with splendid wings spread. With its claws it holds the handle of a sword protruding from stone.

The initiative to build the monument was taken by the "We Remember" Foundation, which is involved in documenting the history of the struggle for Polish independence and nurturing the memory of people who fought against the communist regime in the 1940s and 50s. It was supported in this undertaking by the Zakopane City Council. The author of the monument is Marek Szczepanik, a graduate of the Academy of Fine Arts in Warsaw. The Kuraś Monument was unveiled on 13 August 2006 by the then President of Poland Lech Kaczyński and the son of commemorated - Zbigniew Kuraś. During the ceremony the monument was consecrated by Bishop Albin Małysiak. The ceremony was given a nationwide rank thanks to the presence of the President of the Republic of Poland and its live broadcast by the Polish Television.

The monument of Józef Kuraś aroused controversy over the following years because of accusing the unit of actions against Jews and the Slovakian population. The unconfirmed number of murdered civilians is to be over 400. The dispute over the Kuraś monument, due to the media interest in it, has become nationwide. The resulting dividing line proved to be consistent with how the political scene in the Third Republic of Poland was shaped. Kuraś and the monument were defended mainly by politicians and people who identified themselves with the right. They regarded the monument as a tribute due to the " Cursed Soldiers". On the other hand, people with left-wing and liberal sympathies and the media supporting them exposed not Kuraś's fight with the Nazis, but the main emphasis on the crimes committed. After President Andrzej Duda signed in 2017 an act prohibiting the promotion of communism or any other totalitarian regime by, among others, monuments, the President of the Zakopane City Council received a request to remove the monument. It accused Kuraś of taking up service in the UB and cooperating with the NKVD. None of the applicants appeared at the meeting of the City Culture Committee. The defenders of the monument as well as members of the World Association of Home Army Soldiers appeared. After a lively discussion, the motion to remove the monument was rejected. In September 2018, the monument was covered in red paint by unknown persons. Leaflets accusing Kurataś of the crime of genocide committed against Jews and Slovaks were scattered around the monument. The substance was not removed and traces of devastation are still visible.

The original idea of the monument dedicated to Józef Kuraś and his subordinates was to restore the memory of the heroes of the anti-communist underground who fought against the totalitarian regime after World War II. However, the person of "Fire" and the pacification actions of his unit against the Slovaks' inhabited villages caused the monument to quickly arouse controversy. It intensified as the division into two dominating political camps in Poland became deeper and deeper. For the right wing, referring to patriotic traditions, Kuraś became the symbol of an unbreakable " Cursed Soldier". In turn, the other side sees him as primarily a criminal and an anti-Semite. This state of affairs has left its mark on the history of the monument and social acceptance of its presence in public space. It is now closely connected with political sympathies. The monument to Józef Kuraś is mentioned in tourist guides as a place worth visiting. 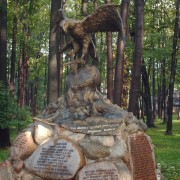