Monument to the Ghetto Heroes

The monument commemorates Jewish insurgents from the Warsaw Ghetto, which lasted from 19 April 1943 to 16 May 1943.

The monument stands on the square between Zamenhofa Street and Sendler Street. Opposite the Monument is the Museum of the History of Polish Jews Polin (opened in 2013).

The Jewish people - their martyrs and fighters [in Polish, Yiddish and Hebrew]

The monument has the shape of a trapezoid with a height of about 11 meters (it was supposed to refer to the Weeping Wall in Jerusalem and the ghetto walls). The mass was made of granite, and the labradorite slabs below it. In front of the monument there are also menorahs made of bronze which serve as candles lit during ceremonies held in front of the monument. On the western side of the mass, there is a bronze relief in the shape of a rectangle, called "The Candle". "In the very centre of the building, Mordechai Anielewicz (the leader of the uprising) is depicted with a grenade in his hand. He is surrounded by an old man, a boy and a woman. Everyone is holding a gun (rifle, grenades and petrol bottles) in their hands. At their feet there is the body of one of the victims of the uprising, and over their heads there is a woman with a child in flames. On the eastern flank of the monument there is a relief entitled "March to the Holocaust" showing the suffering of women, the elderly and children led by the Nazis in an unknown direction.

The Jews living in the territories occupied by Nazi Germany during the Second World War were placed in separated ghettos. From 1942 they were gradually liquidated and the Jews living there were taken to death camps. On 19th April 1943, the Germans began to liquidate the Warsaw Ghetto, but its inhabitants put up an armed resistance, starting an uprising lasting several weeks. The Monument Construction Committee was established as early as 1946, the project was commissioned to the sculptor Natan Rapoport, and the construction was financed by Jewish organizations. The ceremonial unveiling of the monument took place on the fifth anniversary of the outbreak of the Uprising - 19th April 1948. About 20 thousand people took part in the event: about 12 thousand surviving Jews, Polish politicians, leaders of the Uprising, representatives of Jewish delegations from all over the world and the town's residents.

The monument was the place to celebrate the successive anniversaries of the Warsaw Ghetto Uprising (19 April). It played (and still plays) an important role as a Holocaust memorial. The monument was paid homage to the murdered Jews by important figures, such as John Paul II, Dalai Lama XIV, Bill Clinton, Jim Carter, Yuri Gagarin and Willy Brandt. Of particular importance was the gesture of Willy Brandt, who during his visit to Warsaw in 1970 laid flowers at the monument and kneeled on both knees. The picture of the kneeling Chancellor ran around the world at that time and was perceived as a public expression of the Germans' repentance for the crimes committed. A separate monument standing nearby is dedicated to this event.

The monument plays an important role as a venue for central ceremonies on the anniversary of the Ghetto Uprising and on the International Holocaust Remembrance Day (27 January). The ceremonies at the monument are attended by, among others, delegations of state and capital city authorities, representatives of diplomatic corps of other countries and members of Jewish organizations. The ceremonies at the monument are one of the most important elements of commemoration in Poland of Jews murdered during the Second World War. Their most important aim is to raise awareness of the contemporary scale of the crime and to pay tribute to the victims. In the last few years, Polish politicians taking part in the ceremonies have also emphasized that it was the Germans who were the perpetrators of the Holocaust. This is related to the discussion on the participation of Poles in the murder of Jews during the World War II. A copy of the monument was erected at the Yad Vashem Institute in Jerusalem. The monument is present in guides to Warsaw and is an important place on the map of memorial sites related to the ghetto and the annihilation of Jews in Warsaw visited by residents and tourists. The monument is located in the area of the former ghetto, in the vicinity of the Museum of the History of Polish Jews Polin. 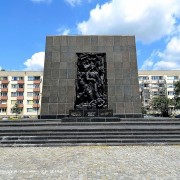 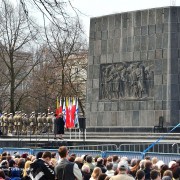