Monument to the Deed of Poles

The Polish community of Szczecin before 1945, the first Polish settlers after 1945, and the Szczecinians who rebuilt and expanded Szczecin after 1945.

A monument in the central part of Kasprowicz Park opposite Jasne Błonia Square and the Town Hall.

There's an inscription at the monument: Monument to the Deed of Poles.

The monument is 22.5 m high and shows three bronze eagles underneath each other. They have their wings spread out as if they were breaking off to fly. They are supported by a steel column. A square lined with granite cubes was built around the pedestal. In front of the monument there is an inscription: The Monument of the Deed of Poles, a little further on, there are also two plaques informing about the monument's symbolism and the circumstances of its creation.

Szczecin and Western Pomerania were incorporated into Poland in 1945. Previously, the area was almost entirely German in character. The idea of building a monument symbolizing the contribution of Poles to the reconstruction and development of the country appeared in the early 1970s. Originally the monument was to be unveiled in 1974 on the 30th anniversary of the Polish People's Republic. In 1976 the Organising Committee for the Construction of the Monument was established, headed by the Mayor of the city, Jan Stopyra. The unveiling took place on September 3, 1979 and was connected with the 40th anniversary of the outbreak of World War II. The celebrations were attended by numerous residents, veterans, Szczecin's pioneers and representatives of social organizations (a total of several thousand people). Representatives of central authorities (Minister of the Interior Stanisław Kowalczyk, Deputy Minister of National Defence Józef Urbanowicz) and representatives of local party and state authorities were also present. The monument was designed by Gustaw Zemla. The surroundings were arranged by Szczecin architects and urban planners under the direction of Witold Andrzejewski.

Eagles symbolized three generations of Poles living in Szczecin. Thus, the monument was supposed to remind of pre-war Polish activists from this area, which served to emphasize the earlier existence of the Polish element on the land taken away from the Germans. The other two generations, commemorated by the monument, created Polish Szczecin after 1945. Thus, the monument symbolized the merging of the city with Poland after the World War II, the separation of several generations was probably an attempt to highlight the relatively long tradition of Polish Szczecin. However, the monument did not play an important role as a place of celebrations commemorating important historical events. The main anniversary celebrations connected with the beginning or end of the World War II were concentrated around other places and monuments. In fact, only a part of the ceremonies connected with the anniversary of the seizure of power in the city by Poles (26.04.1945) and the end of World War II (9.05.1945) took place there.

Today, the monument plays an important role as a venue for the main patriotic celebrations held in the city, including public holidays (1 and 3 May, 11 November) and political demonstrations of various types. The monument is one of the most important points in the city centre and is an attraction for both residents and tourists. 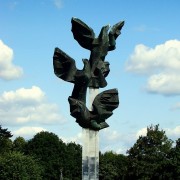 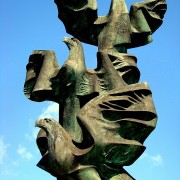 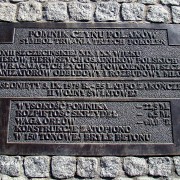 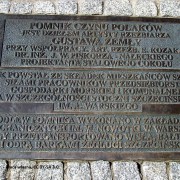