Monument to the fallen miners of the 'Wujek' mine

Nine miners who died at the hands of ZOMO special platoon on 16 December 1981.

The monument stands on the square in front of the main entrance to the "Uncle" mine.

There are two inscriptions on the monument: "In tribute to the miners who died on 16th December 1981 in defence of freedom and solidarity [here the inscription in characteristic historical font] on 10th anniversary", "And whoever wakes up will be praised by fire and who dies will be stoked by fire..."

The monument consists of a 33-metre high steel cross with a smaller wooden cross - which was standing in this place earlier - placed in its arms. The monument also includes a brick mine wall standing behind the cross with two inscriptions. On the left side there is a colonnade consisting of four pillars, with it a dozen or so boards (funded by various institutions and organizations) on the wall dedicated to the memory of miners. Behind the cross on the right there are 9 smaller crosses (they are leaning on a stone structure), each cross is at the same time an urn with the earth from the miners' graves (a separate cross is dedicated to each victim).

On 13 December 1981, the communist authorities declared martial law, whose main aim was to eliminate the independent social movement "Solidarity". In its defense, workers from various industries throughout the country, including miners from KWK "Wujek", went on strike. On 16 December 1981 the police and the army pacified the mine. Special platoon ZOMO fired at miners from machine guns, as a result of which nine of them died. The strike was interrupted. As early as on the evening of 16 December, colleagues of the murdered placed a wooden cross under the wall to commemorate the victims, in January 1982 the authorities removed the cross, but in its place the miners erected another one, which survived until 1991 and became part of the new monument. The unveiling ceremony of the monument took place on 15 December 1991 and was connected with the commemoration of the 10th anniversary of the mine pacification. The unveiling was done by President Lech Wałęsa.

The strike in the "Uncle" mine and its brutal pacification have become one of the most important symbols of society's resistance to General Jaruzelski's regime and the martial law. The monument is a testimony to the lack of acceptance for martial law and the attachment of Poles to the ideas of freedom. The monument also reminds of the repressive nature of the system, whose defenders did not hesitate to kill the striking miners. Anniversary celebrations commemorating the events of 16 December 1981 are held at the monument, attended by representatives of the highest state authorities, among others. The monument is present in tourist guides about Katowice. 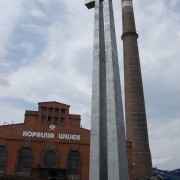