Monument to the Fighters for the Polishness of Opole Silesia

Residents of the Opole region, who before 1945 cultivated and nurtured Polish traditions or sought the area's membership in the Polish state (including Silesian Insurgents and activists of the Union of Poles in Germany).

The monument stands on Krakowska Street, the main promenade in the centre of Opole.

Fighters for the Polishness of Opole Silesia.

The monument is 15 m high and represents the Greek goddess of victory Nike with her hand raised sitting on a bison. It is made of concrete and steel. In front of the pedestal there are commemorative plaques: one, with five truths of a Pole from the sign of the Rodel.

In 1945. The Opole region was completely incorporated into Poland, earlier it belonged to the German state for several centuries. A competition for the design of the monument was announced by the Opole authorities in 1968. The monument was unveiled on 9 May 1970 on the 25th anniversary of the victory over the Third Reich and the incorporation of Opole Silesia into Poland. The ceremony was held with the participation of local state and communistic party authorities. The author of the monument is Jan Borowczak. The surroundings were designed by Florian Jesionowski.

The original name of the monument: The Fighters for the Freedom of Opole Silesia and the pre-existing inscription "Unrelenting in the fight against Germanization of the Silesian people" were supposed to indicate the eternal Polish character of the Opole region, of which the Germans were only occupants. A distinctly anti-German pronunciation was also to place on the pedestal the names of the victorious battles with Germany from Cedynia (972) to World War II. This was in line with the anti-German propaganda present in the 1960s and the strengthening of the stereotype of the aggressive character of Germany. This served primarily to consolidate the nation against the common enemy and to strengthen the belief that an alliance with the USSR was necessary as a counterbalance to the hostile Germany. The monument played an important role as a memorial. It was the central point of celebrating official state holidays. The anti-communist opposition existing in the 1980s also organized actions in its vicinity.

The monument plays an important role as a venue for the main patriotic celebrations organized in the city, including public holidays (1 and 3 May, 11 November) and political demonstrations of various kinds. Monument lost its anti-German character, its name was changed and the names of battles were removed. The installation of plaques clearly indicating the Silesian insurgents and activists of the Union of Poles in Germany was an effort to make the people to whom the monument was dedicated more precise. The monument is one of the most important points in the city centre, closely associated with Opole. 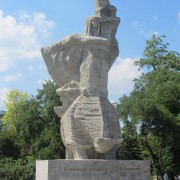