Monument to the Workers' Protest

The inhabitants of Radom repressed in connection with the anti-government demonstration held on 25 June 1976.

The monument stands on the pavement at the intersection of 25 Czerwca and Żeromskiego Streets.

Monument to People Wronged in connection with the Workers' Protest on 25 June 1976.

A cuboid-shaped lump of sandstone, about 2 m high, has a cross and a board with an inscription on it.

On 24 June, the authorities introduced drastic increases in the prices of basic foodstuffs. The next day there was a wave of social protests in many localities, the most violent were the demonstrations in Radom, Ursus and Plock. The most numerous protests were held in Radom (about 20-25 thousand people), street fights took place there and the building of the Provincial Committee of PZPR was set on fire. The authorities brutally suppressed the protest and subjected its participants to further repressions (imprisonment, fines, beatings, expulsion from work). After the creation of NSZZ "Solidarność" in 1980, its Radom activists (among others Bronisław Kawęcki, Andrzej Sobieraj, Jan Rejczak) started to seek permission to erect a monument commemorating those repressed for their participation in the 1976 protests. "Solidarity" announced a competition for the design of the monument, but before the declaration of martial law (13 December 1981) it only managed to lay the foundation stone. The ceremony, which took place on 25 June 1981, was attended by Lech Walesa and Anna Walentynowicz, among others. After 13 December 1981, the authorities did not allow for the erection of a proper monument and the role of the monument commemorating the repressed to this day is played by a stone block with a plaque.

After the declaration of martial law, the monument became a place of anti-communist demonstrations, among others, on 3 May and 31 August 1982, 3 May 1983. On 31 August 1985, Dariusz Tomaszewski committed an act of self-immolation there in protest against the ruling regime.

Since 1989, ceremonies have been held at the monument to commemorate the anniversary of the workers' protest, including the participation of representatives of the highest state authorities. The monument is one of the symbols of social resistance in the Polish People's Republic. It also emphasizes the special role of the inhabitants of Radom, which they played in June 1976. After 1989, the name of the street where the monument stands was changed from 1 May to 25 June. In 1991, during his visit to Radom, Pope John Paul II prayed at the monument for several minutes. To commemorate this event, a plaque with the content of the prayer said by the Pope was placed next to it. The monument was dedicated to the documentary film "Stone", broadcasted on public television. 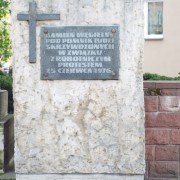