The monument commemorates the battle of Grunwald (1410).

Field between the villages of Grunwald and Stlebark

A field between the villages of Grunwald and Stebark, where the battle of Grunwald was fought.

The monument actually consists of three parts: an 8-metre high obelisk consisting of two granite blocks placed on the pedestal, in each block the faces of knights facing west and north are carved; eleven 30-metre high steel masts with flags of knights fighting at Grunwald; an amphitheatre with museum rooms.

The battle of Grunwald took place on 15 July 1410. The Polish-Lithuanian army defeated the Teutonic Order then, killing, among others, the Grand Master of the Teutonic Order Ulrich von Jungingen. The battle is considered to be one of the most important military successes of medieval Poland and a turning point in the history of Polish-Teutonic struggle. Plans to erect a monument on the Grunwald Fields date back to 1945. The acceleration of their realization was connected with the celebration of the millennium of the Polish state and the approaching 550th anniversary of the battle. In 1958 a competition for the design of the monument was announced, in which the winning design by Jerzy Bandura and Witold Cęckiewicz was selected. The ceremonial unveiling of the monument took place on 17 July 1960 during the celebration of the 550th anniversary of the battle. It was attended by members of the highest party and state authorities: First Secretary of the Central Committee of the PZPR Władysław Gomułka, Prime Minister Józef Cyrankiewicz and President of the State Council Aleksander Zawadzki. They gathered about 200 thousand participants.

The celebrations of the anniversaries of the Grunwald Victory held at the monument were supposed to remind of the victory of Poles or, more broadly, Slavs over Germany and the Germanic nations. This was part of the historical policy of the Polish People's Republic, which aimed to prove the aggressive and hostile intentions of Germany towards its eastern neighbours from the Middle Ages onwards. Germany's detention was to guarantee an alliance with the USSR and other socialist countries, as Gomułka emphasized during the unveiling ceremony: "(...) the road east of German imperialism was closed once and for all. It is hindered by a powerful alliance of states signatories to the Warsaw Pact, united by ideology, and the unshakable unity of the socialist camp". The Battle of Grunwald was one of the examples of great victories of the Slavic side, which managed to stop the aggressors (World War II was also presented in a similar way). The memory of the battle was to serve the national pride and superiority over the eternal enemy. The Battle of Grunwald and the area where it was fought were the subject of disputes over memory, as history was created in a similar way by the Nazis who, in the nearby Hindenburg Mausoleum, commemorated the victory over the Russians at Tannenberg (1914), which was presented as a revenge for the defeat at Grunwald (this time the Germans defeated the Slavs). The mausoleum was blown up by the retreating Germans in 1945, and then its remains were demolished.

Every year in the Grunwald Field and at the monument there are celebrations of the battle anniversary combined with its staging (Grunwald Days) attracting thousands of participants. However, they no longer have an anti-German overtones as in the communist times. Rather, they serve to popularize history and build national pride by recalling the former glory of the Poles and the power of the Polish Kingdom. 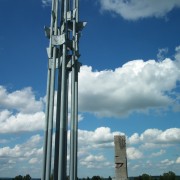 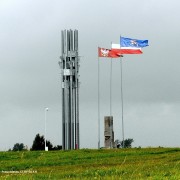 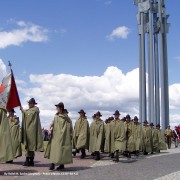