Monument to the memory of the Sybiraks

The monument is dedicated to the Poles deported by the Russians to Siberia (the so-called Sibiraks) as punishment for their independence activities.

The monument stands on the square in front of the County Office building.

On the pedestal (built on the plan of the cross) there are four figures, about 2 m high. They symbolize the victims of deportation to Siberia: a priest, a Polish Army soldier from 1939, a mother with a child in her arms and a 19th century insurgent. Five plaques were placed on the monument, the largest one from the front, the other four with the names of the places of deportation were placed between the figures.

In the second half of the 18th century. The Republic was plunged into crisis and its policy was controlled by foreign powers, primarily Russia. It was opposed by, among others, the Bar Confederation, but it suffered its final defeat in 1772. The Russians sent the captured confederates to Siberia, the first Polish Sybiraks. The next Poles were sent deep into Russia in the nineteenth and early twentieth century as part of repressions for their independence activities (in the years 1795-1918 the Polish state did not exist, and its earlier territory was incorporated into Russia, Austria and Prussia). A similar fate was met by Poles during and immediately after the Second World War, when after 1939 part and after 1945 all of Poland came under the control of the USSR. The initiative to build the monument was taken by the Sybiraks, who were associated with the local Sybiraks Association branch. The ceremonial unveiling of the monument took place on 17 September 1995, the anniversary of the USSR's attack on Poland in 1939.

The monument, like other monuments of this type, commemorates the crimes and wrongs that Poles suffered first from the Russian Empire and then from the Soviet Union. Before 1990, when Poland was subject to the USSR, there was no question of commemorating these events (especially those of World War II). Only after 1990 was it possible and at that time such monuments began to appear as a response to the need to mark these events in the collective memory and public space. The monument is therefore a place of celebrations related to the events it concerns, especially on September 17 (since 2004 it is World Sybirak Day). It is attended by Sybiraks, residents and representatives of local authorities. 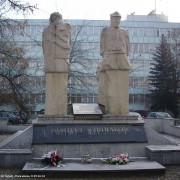