Monument to the Defenders of the Coast / Westerplatte Monument

The monument stands on a mound built on the Westerplatte peninsula at the mouth of the Dead Vistula into the Gulf of Gdansk.

The names of some places where Poles fought during the war were written on the monument. At the bottom of the monument there are those connected with the defense of the coast in 1939: Kosynierzy Gdyńscy, Gdańsk Post Office, Westerplatte, Oksywie, Hel. Above, the names of places where Polish sailors operated: Murmansk, Narvik, Atlantic, Mediterranean, Dunkirk, La Manche. There are also inscriptions on the side walls: Studzianki, Lenino and "Those at Sea" and the date "30 March 1945" (the capture of Gdansk by the Red Army).

The monument measuring 25 m. forms 236 granite blocks, it resembles a bayonet stuck in the ground. Apart from the inscriptions mentioned above, which were engraved in the granite, there are two reliefs on the monument: one depicts an infantry soldier and a sailor (there is also a Soviet rifle - the so-called pepesha), and the other one depicts soldiers killed on the battlefield. The whole structure is set on a high mound. At the foot of the mound seven candles made of pipes of different dimensions were placed. They symbolize the seven days during which the Polish Westerplatte crew defended themselves against the German attack.

In the place where the monument is located there was a military Polish Transit Warehouse with a crew of about 200 soldiers. At 4.45 am on 1 September 1939. Westerplatte was fired by a German battleship, thus giving the beginning of World War II. The defence of Westerplatte, which lasted seven days despite the crushing advantage of the enemy, became a symbol of heroism and sacrifice of Polish soldiers. The initiative of building the monument was born in connection with the upcoming celebration of the Polish State Millennium. In 1963 a competition for the design of the monument was launched. The design by sculptor Franciszek Duszeński and architects Henryk Kitowski and Adam Haupt was chosen for the project. The ceremonial unveiling of the monument took place on 9 October 1966. It was celebrated in connection with the anniversary of the Battle of Lenino and the Polish Army Day (12 October). The ceremonies were attended by about 50 thousand people, including veterans of the World War II, including those fighting at Westerplatte in 1939, members of the highest state authorities, including the vice-president of the Polish Army. The State Council Ignacy Loga-Sowiński, Deputy Minister of National Defence Gen. Wojciech Jaruzelski and Minister of the Interior Gen. Mieczysław Moczar and representatives of the Navy.

The monument, despite its name, did not only commemorate the defenders of the Coast in 1939, but also Polish sailors fighting in other areas. What is more, the monument - for purely propaganda reasons - additionally commemorated the soldiers fighting together with the Red Army at Lenino and Studzianka. In addition, it shows the date of the conquest of Gdansk by Red Army and Polish Army (acting under Soviet authority) in 1945. The symbolism of the monument was therefore supposed to emphasize the brotherhood of arms between these armies. It was supposed to build the feeling that only the military alliance of the USSR is a guarantee of stopping the aggressive drive of Germany. The date of the unveiling of the monument is also significant; it was not the anniversary of the beginning of the Second World War, but the anniversary of the Battle of Lenino. In the following years of the People's Republic of Poland, anniversary celebrations were held at the monument, both around October 12th (Polish Army Day) and September 1st in connection with the anniversary of the outbreak of World War II. Members of state and provincial authorities took part in them.

In recent years, this place has been the focal point of the celebration of the anniversary of the start of the World War II, attended by representatives of the highest state authorities, including presidents and prime ministers. The monument itself and the anniversary celebrations are intended as a reminder that this is where the World War II began, and Poland was the first country to put up armed resistance to the Third Thing and was the first victim of its military aggression. Among other things, this was the purpose of the exceptionally solemn celebration of the 70th Anniversary of the outbreak of the war in 2009, which was given a high international profile. Many important politicians took part in them, including Russian Prime Minister Vladimir Putin and German Chancellor Angela Merkel. 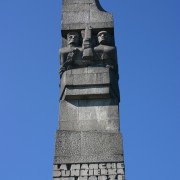 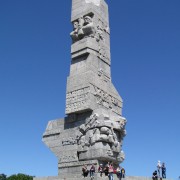 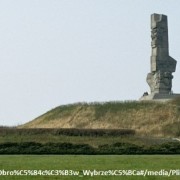 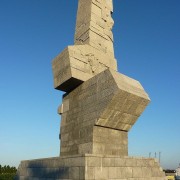