Monument to the Prisoners of Jaworzno Camp

The monument is dedicated to the prisoners of the Central Labour Camp in Jaworzno. It stands not far from the camp grounds, in the place where the prisoners were burried.

Jaworzno, the forest between Podłęże and Stałe settlements

The monument is located in the forest by the walking path connecting Podłęże and Stałe settlements.

"It seemed to the foolish eyes that they died, and they are at peace". On three boards, there is also an inscription in three languages - Polish, Ukrainian and German - with the same content: "To the memory of Poles, Ukrainians, Germans, all those who suffered here innocently, as victims of communist terror, imprisoned, murdered, died in the years 1945-1956 in the Central Labour Camp in Jaworzno - in tribute, posterity".

The monument actually consists of two parts forming an oval of approx. 2.5 m height. They are assembled in such a way that a cross-shaped hollow space is left in the middle. In the lower part of the cross, there is a visible outlier element referring to the shape of the Orthodox cross. On the left part of the oval there is an inscription: "It seemed to the foolish eyes that they died, and they are still in peace". The monument stands on a concrete pedestal made up of three segments (there is a plaque in three different languages on the front of each segment).

In 1943, the Germans established a labor camp in Jaworzno, which was a branch of the Auschwitz-Birkenau camp. In 1945, the Polish authorities took over the camp and organized a Central Labor Camp on its premises. People who were treated by the communist regime as a threat were imprisoned there: activists of the Polish independence underground, Silesians, Germans, Ukrainians and Lemkos. The camp operated until 1949, then the Progressive Young People's Prison, existing until 1955, was established on its premises. Activities to commemorate the camp victims were undertaken by the Polish and Ukrainian sides. The unveiling of the monument took place on 23 May 1998 in the presence of the presidents: Aleksander Kwaśniewski and Leonid Kuchma, Presidents of Poland and Ukraine.

The monument is important as a memorial to the victims of two totalitarian regimes. It indicates that their victims were people of different nationalities and beliefs. The monument could not have been erected until after 1989, because previously it was not officially possible to speak of communist crimes. At the monument there are primarily ceremonies commemorating the Operation Vistula (an action carried out by the Polish authorities in 1947, involving the deportation of Ukrainians and Lemkos living in south-eastern Poland. Some of them were sent to the camp in Jaworzno). They are attended by Ukrainians living in Poland, but also representatives of Polish authorities and young people. 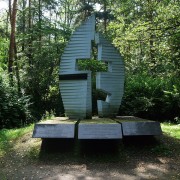