The monument is dedicated to Polish airmen killed during the First World War and the Polish-Soviet War (1919-1921).

The monument stands on a special place at the intersection of important Warsaw arteries: Żwirki and Wigury Street and Wawelska Street.

The figure of an aviator in a 6-metre high uniform was cast in bronze and placed on a 9-metre high plinth. The aviator stands holding a propeller in his left hand, at his feet there is an air bomb. On the plinth there is a bas-relief depicting a "chessboard" - a sign of the Polish Air Force.

The initiative to erect the monument was taken by military aviation officers in 1923, who wanted to commemorate their colleagues who died during the struggle for Poland's rebirth. The author of the project was the famous sculptor Edward Wittig. In 1926, the model presented by the artist gained the approval of the Monument Construction Committee. On November 11, 1932, its ceremonial unveiling at Unii Lubelskiej Square was performed by Marshal Józef Piłsudski.

The German occupying authorities initially intended to dismantle the monument, but there was opposition from German pilots stationed in nearby barracks. On the eve of May 3, 1942, two scouts of the Grey Ranks: Jan Bytnar "Rudy" and Jan Gut painted two "anchors" on the pedestal of the monument. - symbols of fighting Poland. The monument was then erected not far from the Gestapo headquarters at the Szucha Avenue. They were visible on the pedestal many years after the war. The monument was destroyed by the Germans after the fall of the Warsaw Rising in 1944. The monument was reconstructed by Alfred Jesień in 1967 and placed in its current location.

The monument plays a particularly important role for people connected with aviation, and ceremonies are held underneath it, with the participation of aviators, including the anniversary of the unveiling of the monument and the Polish Aviation Day. Due to the action of the Grey Ranks it is also a symbol of anti-Hitler resistance, in August 2010 a brass "anchor" symbolizing the original from 1942 was unveiled on the pedestal. 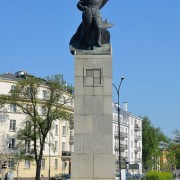 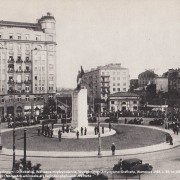