Monument to Bolesław the Brave

The monument is dedicated to the first crowned ruler of Poland - Bolesław the Brave (967 - 1025).

The monument stands on the square in the immediate vicinity of the Basilica of the Assumption of the Blessed Virgin Mary in Gniezno.

The idea of erecting a monument appeared immediately after Poland regained independence in 1918. It was supposed to commemorate the 900th anniversary of the creation of the monarchy in Poland (Bolesław was the first king of Poland), which was an important element of the state's process of creation. The author of the project was a Poznań sculptor Marcin Rożek. Initially, the artist prepared a plaster cast, which was unveiled in 1925 by President Stanisław Wojciechowski in connection with the 900th anniversary of the coronation of Bolesław the Brave. The actual bronze monument was erected in 1929. It was ceremonially unveiled by President Ignacy Mościcki.

The monument emphasized the existence of the Polish statehood as early as in the 11th century, which was particularly important a few years after regaining independence and the rebirth of the Polish state after 123 years of partition. The German occupation authorities tried to destroy the monument in the autumn of 1939, but they only managed to do partial destruction, only in the spring of 1940 was the monument completely destroyed. The idea of rebuilding the monument appeared as early as 1946, but it was not until 1985 that it was finally realized.

The monument plays an important role as a venue for the main patriotic celebrations held in the city, including public holidays. It is also important for Gniezno itself and its inhabitants, as it emphasises the important role of the city in the beginnings of the Polish state. It was its capital and the seat of the monarch. 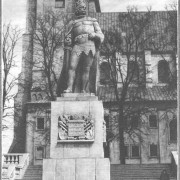 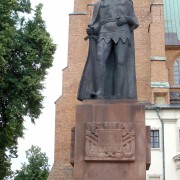