Monument to the shot hostages from Nowy Sącz

In memory of hostages shot during the Nazi occupation in Nowy Sacz.

The sculpture stands in front of the Architecture Museum building in Wroclaw, on the main road leading to the nearby city park

In the years 1966-68, sculptor Władysław Hasior prepared a project of a monument to the shot hostages from his home town, Nowy Sącz. Despite this design was awarded by the Ministry of Culture, the monument was never erected. The first attempt to build it was stopped when the local authorities decided that the figures depicted on it refer to the crucifixion of Christ.  The idea of building the monument returned a few years later, in 1975, when Nowy Sącz became the capital of the voivodeship. Because of the opinion that the flame on the monument will remind of the commander of the anti-communist partisans operating in the region, Józef Kuraś, called ''Fire'', construction of the monument was stopped again. In the end, the construction of the monument never took place.

The design of the monument - size 1:2 in relation to the planned one - was purchased by the Museum of Architecture in Wroclaw and placed in front of the museum building. The purchase of the sculpture was determined by artistic considerations and the author's reputation.

In the 1970s, on All Saints' Day, the museum staff lit the flames on the monument, using specially prepared fuel. Gradually, however, this tradition disappeared. The last time the flames were lit was in 2003.

The sculpture has a purely decorative function, the knowledge about the history of this object is practically zero. One of the few attempts to restore the memory of the original idea of the author was to light flames in 2014, during the Night of Museums. 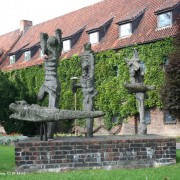