Monument to the victims of the AEL Rattwitz German labor camp

The monument is located near the main street, on a separate parcel, with an alleyway leading to it. There are no buildings around.

In the memory of the fallen

Two steel plates depicting human figures, in characteristic vertical white and blue stripes with raised hands, with a hole in the chest. Next to them stands a steel cross. The whole is placed on a concrete base on which the inscription "In memory of the fallen" is engraved.

The Arbeitserziehungslager Rattwitz camp functioned from 1942 to 1943. It was run by the Wroclaw Gestapo and its prisoners were representatives of various nationalities, including Poles, Ukrainians, Russians and Czechs. Prisoners were employed in the Krupp factory in Jelcz, and on the construction of the railway line. After the opening of a branch of the Gross Rosen camp in Miłoszce (KL Fünfteichen), the camp was closed and its prisoners were moved to the new facility. The dead and murdered were buried within the camp. The monument was unveiled in 1967, on the 25th anniversary of the launch of the educational work camp. The author of the monument is Bolesław Telipa, the founder of the monument was the nearby Jelczańskie Zakłady Samochodowe (Jelczańskie Automobile Works), which owned the area where prisoners from the Rattwitz educational camp worked during the war.

The monument served as a local memorial, occasionally visited by nearby residents and local authorities. On 08.05.2015 a ceremony connected with the celebration of the 70th anniversary of the end of World War II took place, prepared by the Public Middle School No. 1 in Czernica and the Head of the Czernica Commune.

The monument is a place of remembrance of the camp's inmates, looked after by a nearby school that takes care of the local memory of the camp. Gradually, however, the content of the commemoration has changed, extending it to Polish war victims. Near the monument, a cross commemorating one of the victims of Katyn has been erected, as well as an "oak of memory" - dedicated to the victims of the Soviet crime in Katyn - has been planted. 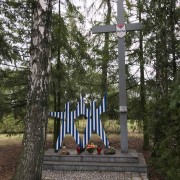 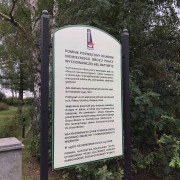