Monument commemorating the synagogue in Opole

The monument commemorates the burning of the synagogue during the 'Crystal Night' and, in a broader context, German crimes against Jews.

The monument is located next to the sidewalk, in front of the fence surrounding the parcel where the synagogue stood (currently there is a kindergarten).

In Polish, Hebrew and German:

"FOR THE SAKE OF FIRE THEY GAVE AWAY YOUR TEMPLE".

Basalt block, 230 x 140 cm in size, to which a metal board, of a characteristic shape of matzev, with inscription is attached.

The Opole diaspora was strongly assimilated, in 1933 there were 525 Jews living in Opole (1.2% of the total population), but it did not miss the madness that the Nazis unleashed after taking power in Germany. During the Crystal Night of 9/10 November 1938, the Nazi militia dragged the rabbi out of his apartment and forced him to set fire to the synagogue. The rest of the building was demolished. Today, all that remains is a small building in which the caretaker once lived.

The initiative to build the monument came from professor Michał Lis, a historian and employee of the Silesian Institute. The monument was unveiled on November 9th, 1998, on the 60th anniversary of the Crystal Night, in the presence of the authorities of the Opole Voivodeship and the city of Opole, the cultural attaché of the Embassy of Israel in Warsaw, Sylwia Berlatski. Kaddish - the Jewish prayer for the dead - was sung by Henryk Traller, cantor of the Jewish community of Wrocław, and the homilies were given by Klaus Wollenweber, bishop of the Evangelical Diocese of Goerlitz and Alfons Nossol, bishop of the Diocese of Opole.

In 2013, by decision of the municipal authorities, an information plaque about Leon Baeck, the first rabbi of the burnt synagogue, was placed next to the monument.

Every year, at the monument, on the anniversary of the Crystal Night, ceremonies are held with the participation of employees of the Silesian Institute, municipal authorities and employees of the German consulate in Opole. The memory of the burnt synagogue and the ceremonial laying of flowers at the monument are a regular feature of the annual international scientific conferences organized by the Silesian Institute, entitled Colloquium Opole. The monument is mentioned in city guides, but it is not an important memorial for the inhabitants of Opole. 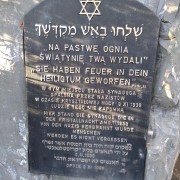 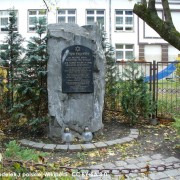 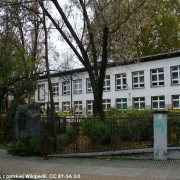 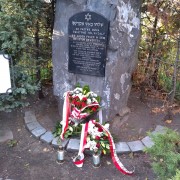 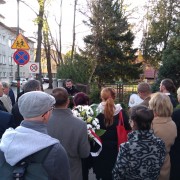 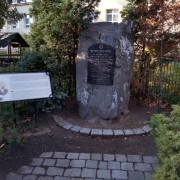 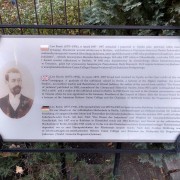