Monument to the Victims of Stalinism (Wrocław)

It is located just off the sidewalk, on one of the most frequented streets in the Market Square. Nearby is the Opera House and the National Music Forum.

ON THE 50TH ANNIVERSARY OF THE IMPOSITION OF THE STALINIST SYSTEM ON POLES IN TRIBUTE TO ITS VICTIMS, AS A WARNING TO THE LIVING AND FUTURE GENERATIONS

On the pedestal, to the left of the monument (in Polish, German and Russian):

MONUMENT TO THE VICTIMS OF STALINISM

On the pedestal, on the right side of the monument:

A composition of diagonally arranged granite slabs, which are mutually support each other. On the top there is a metal structure, a wreath of barbed wire, symbolizing a crown of thorns. In addition to the inscription plates, the stone plates bear the emblems of the cross, emblem and the Virtuti Militari Order. The whole is placed on a low stone base.

The monument was created on the initiative of Leszek Skonka, an anti-communist opposition member, as the first place to commemorate the victims of Stalinism in Wrocław. It was designed by Tadeusz Teller. The whole work, without the support of state institutions, was done socially. The monument was unveiled on 17 September 1989, on the 50th anniversary of the Soviet Union's aggression against Poland. The monument is taken care of by the Committee for the Remembrance of Victims of Stalinism.

The monument was repeatedly devastated.

Shortly after it was unveiled, the cross was ripped from it and thrown into the nearby town moat, a replica of the Virtuti Militari Cross was destroyed and the crown of thorns crowning the monument was broken.

The monument was repeatedly covered with paint.

In 2006 the cross decorating the monument was stolen.

In 2011, the Monument to the Rotamaster of Pilecki was unveiled nearby (see a separate article) - victims of Stalinism.

The monument is an important place for anniversary ceremonies commemorating the victims of communism. The main celebrations take place on December 13th (the anniversary of the introduction of martial law) and March 1st (National Day of Remembrance of the "Cursed Soldiers"). It is present in the city guides and on the tours of the city history. 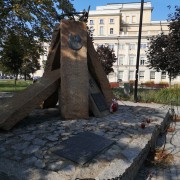 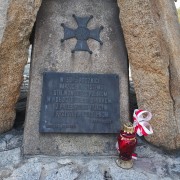 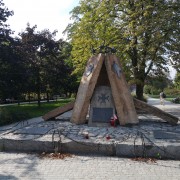