The monument is located in an open square, right next to the small church of St. Peter and Paul. St. Martin's Church. It is perfectly visible from the street side.

The statue shows Pope John XXIII in liturgical robes, extending his right hand in a gesture of blessing. The figure is on a small rectangular pedestal with an inscription: Pacem in terris. The monument is made of granite, the figure is 5 meters high.

According to the arrangements between the leaders of the USA, Great Britain and Soviet Russia at Yalta and Potsdam, the pre-war borders in Central Europe have been significantly shifted. As a result, the lands that had been part of Germany so far were granted to Poland (as the so-called Western Lands, wrongly called Recovered Lands by the communist propaganda). This forced change of borders entailed a migration of many millions and also became one of the key problems in post-war German-Polish relations. For many years, the authorities of West Germany did not recognise Poland's western border, emphasising that it was illegally occupied and should return to the German state. Therefore, the Polish authorities paid particular attention to any political statements or gestures that could be used to highlight the Polishness of the disputed territories - which were not recognised by all countries. One such statement would be the words of Pope John XXIII, which the communist authorities interpreted as confirming Poland's rights to the Western Lands. This became the basis for a broad propaganda campaign, which the Pope presented in a very positive light.

On June 5, 1968, five years after the death of Pope John XXIII, a monument commemorating the Pope was erected in Wrocław, the informal capital of the Western Lands, right in the centre of the city's church life - Ostrów Tumski. It was the first monument to this Pope in the world, as well as the first monument to a priest in communist Poland, which was not created on the initiative of the Church, but by decision of the Voivodship Committee of the Polish United Workers' Party. The unveiling of the monument had the character of a state celebration and became an opportunity to emphasize Polish rights to the Western lands. It was held with the participation of the Wroclaw clergy, but in the absence of some of the church dignitaries. The inscription "Pacem in terris", the title of the papal encyclical, was placed on the pedestal of the monument, which, as interpreted by the communists, was part of the so-called peaceful policy of the Soviet Union, which gave the monument an additional political context.

The author of the monument is Lidia Nitschowa,

In December 1970, the authorities of Poland and West Germany signed a treaty recognising Polish western borders, and in 1972 Pope Paul VI incorporated Wrocław into the diocese of Gniezno, which finally closed the unregulated legal status of the Western Lands. This caused the monument to lose its political meaning.

The canonization of John XXIII in 2014 made the monument again interesting, but it was a temporary state. Today, however, no celebrations are held around it. Pope John XXIII himself is not a widely recognized figure. 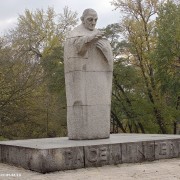 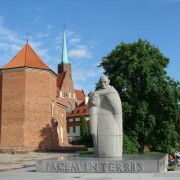