Monument to the Mermaid

The monument is dedicated to the Mermaid - the symbol of the capital city of Warsaw.

The monument is located on a special square next to the quayside, right next to the entrance to the subway. It is not adjacent to any objects. It is perfectly visible.

Warsaw - inscription on the shield.

The monument was initiated by the Mayor of the city, Stefan Starzyński, who in 1936 announced a contest, won by Ludwika Nitschowa's project. Originally, it was to be a 20-metre high sculpture made of glass, placed on a pillar in the middle of the Vistula channel. For financial reasons, this idea was abandoned, opting for a more modest solution - a sculpture surrounded by fish and seagulls, which was to be set up in a fountain. The monument was unveiled by the Mayor on 29 June 1939. Due to the difficult international situation, the ceremony was modest in nature, and the Warsaw press only briefly mentioned the new monument and its photographs.

The monument was not on the list of objects intended by the Germans for dismantling, it was also one of the few that survived World War II without major damage.

In the 1980s a comprehensive renovation took place, during which the fountain was dismantled.

In 2005, a general renovation of the monument was carried out, during which the fountain was reopened. A small square was created around the monument.

In 2006 a plaque was placed in front of the monument to commemorate the awarding of the Virtuti Militari Order to the city of Warsaw - for defense against German troops during the defense war of 1939.

The mermaid has been a symbol of Warsaw for centuries. In a sense, the indestructible monument of the Mermaid became a symbol of a city reborn from the wartime destruction and from the first years after the end of the war it was widely used in materials promoting the city. In the contemporary collective memory, the image depicted on the sculpture standing in the Powisle district of Warsaw is associated not only with the contemporary city, but also with the heroic and tragic history of the city during the war, and especially during the Warsaw Rising. This is emphasized, among others, by the plaque commemorating the awarding of the Virtuti Militari Order - the highest Polish military decoration, which can only be earned in combat. An additional element that appears in the context of the monument is the model who lent the siren a figure and face. She was a student of Warsaw University at the time, Krystyna Krahelska. She became a recognizable figure when a few years after the war the author of the sculpture revealed who was her model, and it turned out that Krahelska took part in the Warsaw Uprising as a nurse - in which she died - and was the author of the song "Hey boys, bayonet on the gun", which became one of the anthems of the Rising. A copy of the Mermaid Monument was placed in the Warsaw Rising Museum, in the part devoted to Krystyna Krahelska. 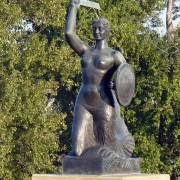 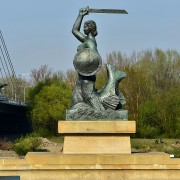 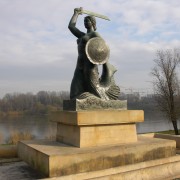 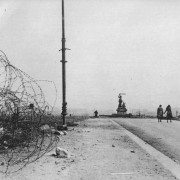 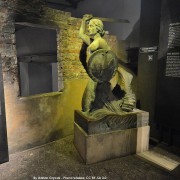