The monument is dedicated to Romanian soldiers who had fallen during the Great War.

The monument is located in the basin of the Caraiman mountain range (situated on the eastern side of the Bucegi Mountains), on the edge of the slope towards Valea Seacă, at an altitude of 2,291 meters.

The monument has a total height of 39.30 meters, out of which the pedestal is 7.90 meters high and the actual cross is 31.40 meters high. The cross is made of riveted steel beams. Both the vertical axis of the cross and the two arms are split into cubes, each side of the cube having two diagonal beams which unite the sides, forming Saint Andrew's Cross. The cross is placed on a square concrete plateau, with the side measuring 21.5 meters, surrounded by stone pillars to the East, North and South; the pillars are linked by thick metal chains. On the western side of the monument, on the inside, there is a metallic ladder which leads to the top of the cross. To be visible, the cross was equipped with a lighting system from the beginning. Currently, the cross is lit by 300 light bulbs.

The idea to build a monument in Bucegi in memory of the soldiers fallen during the Great War arose in 1921. The monument was built by order of King Ferdinand I and it was completed in two phases. The first phase started in 1924 and it related to building the foundation. The second phase started in 1926 and it comprised of the actual building process, based on the project of architects Georges Cristinel and Constantin Procopiu. The materials used to create the monument were transported up to an altitude of almost 3,000 meters using carriages and the funicular. The monument was inaugurated on 14 September 1928, on the day of the Exaltation of the Holy Cross.

Once the communist regime took power, the cross was neglected, which led to stop illuminating it. In 1972, communist authorities came up with the idea to cut off the arms of the cross, placing a star on its top, as a symbol of socialist victory. Nonetheless, the plan was not carried out. Starting 1991, the cross has been illuminated. In 2013, Guinness World Records declared the monument as the highest in the world (being located at the highest altitude in the world).

The Cross on Caraiman is one of the most important tourist attractions in the area and it is visited by thousands of tourists annually. Due to its impressive size, the Cross is visible from tens of kilometres away, both during the day and at night (due to the lighting system). Commemoration ceremonies are occasionally organized here. Such a ceremony took place in 2018, the year marking 100 years from the Great Unification of Romanians and 90 years from the inauguration of the monument. 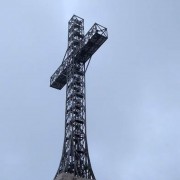