Cenotaph from the Paupers’ Cemetery

Political prisoners and deportees from the communist period.

The Cenotaph is located in The Paupers’ Cemetery, which is situated outside of Sighetu Marmației, on the road toward Satu Mare, at about 50 m distance from the romanian-ucarian border.

The outline of Romania has been traced using fir trees. The monument have been erected in the place on the map corresponding to the town of Sighet, where in the ’50’s was imprisoned the politic, economic, cultural and religious elite of interwar Romania. The monument has two parts: an altar from limestone, which has a niche beneath, where dozens of urns containing earth from the various prisons, labour camps, deportation centres, and places of execution have been laid. Behind the altar stands a cross in the Byzantine style, carved from limestone.

The Paupers’ Cemetery, which is located at 2.5 km outside the city, is an architectural ensemble dedicated to the memory of the political prisoners who died or were executed in the communist prisons and labour camps or as deportees, and also to the memory of the partisans who were killed in battles. Today the cemetery is part of the Memorial to the Victims of Communism and to the Resistance, given that in the 1950s it was here where dozens of political prisoners who had died in Sighet Prison were buried. It is not known with any certainty how many of the fifty-four prisoners who died in Sighet were buried here and how many were buried elsewhere, as the communists were in the habit of covering their tracks: the names of the dead were neither recorded officially nor marked on their graves. The need to mark the Poors’ Cemetery as the burial place of a part of the political prisoners imprisoned in Sighet, determined making of a monument that have been erected in the place on the map corresponding to the town of Sighet. The monument was realized by master stonemason Constantin Marinete and it was unveiled in 2008, on the occasion of the Rememberance Day.

Every year, during Remembrance Day, former political prisoners, deportees, their friends and families are invited to the Memorial, and at the end of the events a religious service is held in the memory of those who died in prisons, labor camps and deportation.

It is a place of annual pilgrimage to honour the memory of the anti communist martyrs. Being part of the Sighet Memorial, the Poors’ Cemetery, and, at the same time, the Cenotaph, is visited every year by thousands of tourists 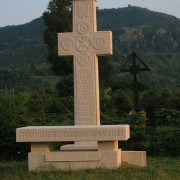 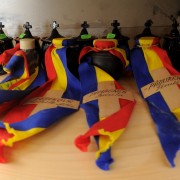