Monument of the Signers of the Transylvanian Memorandum

The Transylvanian Memorandun – petition sent in 1892 by the leaders of Romanians in Transylvania to the Austro-Hungarian Emperor, asking for equal ethnic rights with other nationalities from Transylvania.

The monument is located at the intersection of Piața Unirii (Union Square) with Bulevardul Eroilor, in front of the former Council House of the old City Hall, close to the Transylvanian Art Museum, to Gheorghe Dima Music Academy and to Babeș-Bolyai University.

The Monument of the Signers of the Transylvanian Memorandum is 18.8 meters tall and it is composed of two pillars which meet around a bell in the lower side. It is placed on a stone platform which contains stairs. The inscription on the monument is a phrase uttered by Ioan Rațiu, one of the main authors of the Memorandum in the Cluj trial. On the side facing Union Square one can read the names of the people to whom this monument is dedicated.

It was unveiled on 9 June 1994 in memory of those who had represented the Romanian community in those times, as an homage to the fight for national emancipation of Romanians from Transylvania, as well as to the leaders of that period who were tried and sentenced to prison during the 1894 trial from Cluj. On the 100-year anniversary of that event, in 1994, local authorities from Cluj decided to place a monument in the city centre, Union Square, on Bulevardului Eroilor. The monument was made by sculptor Eugen Paul.

In 1892, the main figures of Romanians from Transylvania drafted a memorandum addressed to the Imperial Court in Vienna so as to protest the situation of Romanian ethnics from Transylvania, who represented the majority of the people, requesting that their natural rights be respected (the Transylvanian Memorandum). After receiving the petition, Emperor Francis Joseph I sent it to Budapest and its authors were tried for treason. The process took place in Cluj, between April 25 and May 7, 1894. The authors of the document were sentenced to prison. Following the diplomatic intervention of Carol I, King of Romania, authorities pardoned those convicted. The monument still keeps alive the Romanian people's spirit of sacrifice.

A place for bringing homage to the fight for emancipations of the Romanian nation. Considering its location, currently in a pedestrian area, it is one of the most popular promenade places for citizens of Cluj. Present in tourist guides, it is annually visited by hundreds of thousands of tourists. 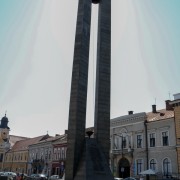 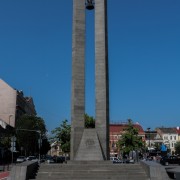